This is week #2 for My Book Boyfriend here at Bookish Temptations.

Make the #jump and get ready to…

Dominic Grayson- Dominic is a new aquisition for me as far as my fantasy boyfriends go, but he’s in my top 10 and I have no doubt that he’ll stay there. I fell in love with him immediately and I fell hard. If you’ve read the books you know why, and share my deep feelings for him. If you haven’t read them yet…OMG! You need to do so now…RIGHT NOW! O. Wait! Finish reading this first 😉

Dominic is all hard male…YES,  I mean it that way. Hard muscled, hard…well lets just say that he’s hard where it matters. He speaks Spanish fluently, and when you read him speaking to Kerrigan? If you don’t just melt away then something is bad wrong with you. O to hear him say Querida to me just once…Wow! Just thinking about that gives me shivers and tingles all at the same time.  Dominic is a ghost sometimes, but I’m ok with that becuz when he isn’t? YOWZA! He’s got thick black hair hair and celedon green eyes. He’s very protective too…sometimes maybe a bit too protective, but I think we could work that out just fine. After all…he only wants me to be safe. 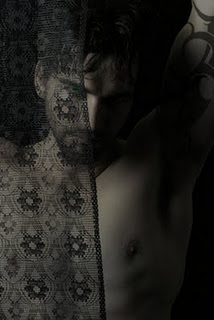 I think these are excellent representations of Dominic *DIED*

Here’s a sample of pure yumminess from Cataclysm:

He took the kiss he had been denied and moved her until the backs of her knees hit the couch behind her and she was forced to sit. Then he lifted one of her legs onto the couch and kneeled before her.

“What are you doing?” she asked, smiling.
A devilish smirk pulled at the corner of his lips, and he bent his head as he turned on the full power of his bedroom eyes and placed an open-mouth kiss to the top of her thigh. “Making a good impression. I couldn’t give a shit less what this other guy thinks about me, but you . . . you I want to impress.”
“You don’t need to impress me, Dominic,” she said, but made no effort to stop him. “And I’m well aware of your skills. All of them, in fact, and I am very, very impressed.”
“Mmhmm. Well, I think maybe you might need a little reminder of what will always be waiting for you at home.”
He continued his ascent up her thigh and was just about to raise the skirt of her dress when she stopped him. Dominic gave her a wounded look, his pride taking a hit. She had never refused him before, and now she was sitting there with a big fat ‘denied’ sign flashing neon red above her head.
“Colton and Gabe are in the kitchen, and Andrew will be here any minute. We don’t have time for this.” She used the heel of her shoe to his shoulder to nudge him back.
It gave Dominic a glorious view of the white satin panties she wore underneath, only fueling his need, and he turned his face to press his lips to her ankle. Then he pulled out all the stops, dropping his voice to that rich, dark level he knew she couldn’t resist. His eyes bore into hers, lust pouring from their depths. “Querida, for future reference, a fuck-me heel planted into a man’s shoulder will only make him want you more, not less. But I have a feeling you already know that.”
He kissed her calf, lingering over her skin as he lightly teased her. Unable to resist, he looked between her thighs and licked the inside of his lip in eager anticipation. “Quiero saborearte.”
The sultry Spanish words licked at her even as he pushed past her makeshift barricade and nuzzled the thin silk between her thighs. She didn’t need him to translate the words to know their meaning. She had heard them whispered to her in the past, and even now she could feel the memory of his cold breath brush against her ear. He wanted to taste her, to savor her.
Expert fingers found their mark when their tips caressed the starburst-shaped birthmark on her hip, the mate to the mark on his shoulder. Instantly she was swept away by his touch. Everything else ceased to exist, and all that remained was Kerrigan, Dominic, and the passion they shared.
Um…Yeah…Jaw Drop right?!?
Remember that’s just 1 little sample, so if you haven’t read it?!? Don’t just stand there go buy it.