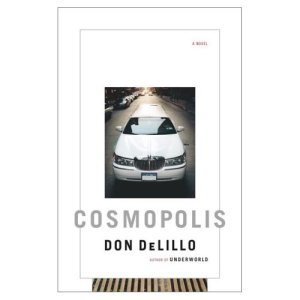 It is an April day in the year 2000 and an era is about to end–those booming times of market optimism when the culture boiled with money and corporations seemed more vital and influential than governments.

Eric Packer, a billionaire asset manager at age twenty-eight, emerges from his penthouse triplex and settles into his lavishly customized white stretch limousine. On this day he is a man with two missions: to pursue a cataclysmic bet against the yen and to get a haircut across town.

His journey to the barbershop is a contemporary odyssey, funny and fast-moving. Stalled in traffic by a presidential motorcade, a music idol’s funeral and a violent political demonstration, Eric receives a string of visitors–his experts on security, technology, currency, finance and theory. Sometimes he leaves the car for sexual encounters and sometimes he doesn’t have to.

Cosmopolis, Don DeLillo’s thirteenth novel, is both intimate and global, a vivid and moving account of a spectacular downfall.

In the following post, I will be reviewing DeLillo’s novel, but I will also be fangirling HUGE over the movie adaptation that was premiered in Cannes last weekend. I was fortunate enough to have been able to watch some of the filming that occurred here in Toronto last summer, and as a result, this book and the resultant movie holds a special place for me. So if you are not a fan of Robert Pattinson or David Cronenberg, I will forgive you. Mostly.