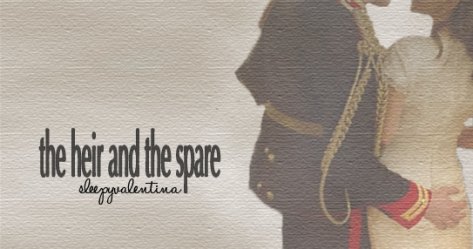 The Heir and the Spare by sleepyvalentina

Summary: My sister keeps telling me the media is way too hard on Prince Edward—that he isn’t an arrogant, self-entitled bastard and I’d like him if I got to know him. Right. The more time I spend with His Royal Heinous, the more I want him to leave me alone. But he won’t, and since the tabloids already think I’m sleeping with him, he might as well kiss me.

This WIP was rec’d in the comments a few weeks ago by theo8. Talk about life imitating art. Prince Harry’s recent, um, exposure in the press made me think of this story quite a few times. Not that Prince Edward had a naked party in Vegas, but he is the second born prince, has the rep of a playboy, and gets treated similarly by the British press. In reality, well, in the fic reality, Edward does not live up to his reputation. He also has some kind of secret with Bella’s sister who is engaged to his older brother. This story is very funny and makes me smile. Bella is so baffled by her attraction to Edward.
Edward just has no idea at all how to have an actual relationship. I don’t know how they are ever going to figure things out but I have a feeling they will.

END_OF_DOCUMENT_TOKEN_TO_BE_REPLACED

Jena Baker’s life was a Type-A personality’s dream: job she loved, degree almost finished, great friends… all firmly in her control until one night of insanity when her past collides with her present.

After a New Year’s Eve party in San Francisco, Jena wakes up in a strange hotel room beside her college crush, Nicholas Cooper. Funny thing, but showing her wild side to a man she knows makes the prospect of facing him the next morning infinitely worse, so she slips away before he wakes. Back home in Davis, she decides to let old flames die…but that doesn’t stop dreams of her night with him from coming back to haunt her.

Nicholas wasn’t looking for change, other than a change of scenery. His life was perfectly pleasant, even, and rational…until Jägermeister led to a madly out-of-character night. Now he’s dreaming of an angel his mind can’t quite remember but his body won’t let him forget.