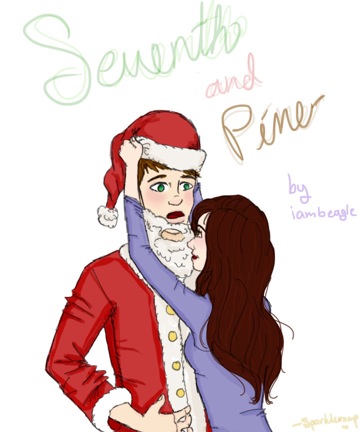 Seventh and Pine by iambeagle
Eating food, drinking beer, and watching football are acceptable ways to spend your Thanksgiving Day. Wooing your niece’s insanely attractive babysitter, however, is not. EPOV
From the author of the holiday classic, The Cellar coughstillhopingforthatweddingchaptercough, we’re getting a new fic set on Thanksgiving Day. Prepare yourself because it’s LOL funny. On Thanksgiving, poor Edward just wanted to drink some beer. But first, he had to try to make his niece happy, meeting a hot girl in the process. Later, he ends up wearing a Santa suit and is about to go wait in line outside Walmart. How did this happen? LOL And the day’s not over yet. I’d post an excerpt but I don’t want to spoil any of the jokes for you. Still a WIP, so we have yet to see if he survives Walmart or gets the hot girl, but I think his chances are good. Either way, it should be fun.

The Twilight Public Lovin’ Contest just closed and I’ve been reading the entries.  I can’t tell you my faves because the judging is still happening, but there are some very good ones. Have a fan nearby when you read them. Just saying. PS Remember to choose “Fiction Rating: All” to see the good stuff.

And look! Christmas one-shots! Old ones: The Sandbox Presents Anything Goes Under the Mistletoe.

Put this one on alert for a new one shot every day: Countdown to Christmas 2012 A Lyrical Melody.

If you know or hear of a Holiday one shot contest please let me know. I’m abinar on FFn and the twitter. I love Holiday one-shots, and I’m not ashamed of it. Oh hell, I love all Holiday fics, hook me up people!

So, my rec. this week is something I am reading right now, but I love it so much that I couldn’t wait to share it with you. It’s Livie79’s Practice to Deceive. *complete*

Deciding that I needed to take a break from AU stories, I picked this one because I liked the Halloween story Liv wrote, Que Sera Sera. I will warn you Edward is very bitter and angry in this one, even though he feels justified in his actions, he is bound and determined to hurt certain people in his life, and in turn drags everyone down with him. We find out immediately that Edward has been lying to Bella about his intentions towards her. In spite of the fact, that I didn’t know the details yet about why he did what he did, I still felt compelled to comfort him.

See, Edward’s best friend Jake betrayed him with Maggie, his girlfriend of three years, in front of all of his friends. So when he finds out that Jake has a new girl, Bella, Edward decides that he needs to get even with Jake. He wants him to hurt, like he did. Bella doesn’t easily fall for Edward, but his perception of her is tainted anyway. To him all women are lying whores, so she must be too, right?

In each chapter, we read about why Edward is doing what he’s doing, and whom it affects, but then things start to change. Edward’s feelings change, and he digs himself deeper in the web of lies. I am about ¾ through this story, and have been loving every word. Liv is a great storywriter.

Here is exert that sheds some light on Edward’s thoughts in the beginning of his deception:

“Are you sick?” Well sick sounded a lot better than hungover, and maybe I could play it up a little, get her to feel sorry for me.

“Yeah,” I murmured, running my hand across my stomach for emphasis. “You wanna grab a table and wait for the line to die down?” I asked, but started walking over to the table before she answered, I knew she’d follow. She plopped down in the chair across from me and gave me an appraising look.

“You sure you’re not just hungover?” she asked, her brow arched. Shit. I wonder if her coworker had mentioned seeing me out last night, and if that was a good or bad thing.

“Nah, I went out for a while with a buddy of mine, but I was already feeling kinda shitty so I called it a night early.” She nodded her head but kept her eyes down, watching her fingers as she slowly shredded a napkin on the table.

“Yeah I heard you were out last night,” she said nonchalantly. I tried to fight back the grin that pulled at the side of mouth, but the way she narrowed her eyes let me know I was unsuccessful.

“Who’s the stalker now?” I smirked, no longer bothering to try and hide my smile. She balled up her napkin and threw it at me, a scowl on her face.

“Shut up. And I can’t help that your little performance last night had Jane gossiping to everyone about you at work this morning.” she said sarcastically. Jesus fucking Christ, will this girl ever stop being so damn defensive? Not that she shouldn’t be, but still, it wasn’t very conducive to my plan. I raised my brow and leaned forward, resting my forearms on the table and clasping my hands together.

“And why exactly do you believe what I said last night was a performance?” She rolled her eyes at me. What was I going to have to do to get this girl to agree to go out with me? She was so fucking stubborn.

“Really, Edward,” she deadpanned. Okay, it was do or die time, she was either gonna agree to go out with me or she wasn’t, but something had to give. I leaned back in my chair and scrubbed my hand up and down my face before letting it fall limply in my lap.

“What do you want me to say Bella? That I’m sitting at home every night pining away for you? Doodling your name and drawing little hearts around it?” I asked exasperated, really hoping this shit wasn’t about to blow up in my face.

“I like you, I think I’ve been pretty clear about that. But you won’t even give me a chance to buy you a cup of coffee. So yeah, I might have played it up a little bit for Jane to get your attention, because honestly I’m starting to feel like you’re not really interested in going out with me. Maybe you just like stringing me along.” I accused looking down at my lap and tugging on the hem of my shirt. There was no fucking way I could look at her right now, even I was shocked at the bullshit that had just flown out of my mouth. I heard her sigh heavily before tapping her nails against the table.

“Hey, look, I’m not trying to string you along okay, I just..” she trailed off. I waited a second for her to start speaking again but when she didn’t I raised my head to look at her. She was studying me, her eyes intense as they bore into mine.

“Don’t make me regret this,” she said lowly. A slow smile crept across my face as I realized what she was saying.

Edward is quite mean in the beginning, but when he starts to really express how he is feeling about Bella…*swoon* This story kind of reminds me of a dressed down version of Cruel Intentions, the movie.

2 thoughts on “FanFic Friday: Seventh & Pine, and Practice to Deceive”