I am not sure if I am in the minority with regards to our readers and followers’ thoughts and feelings about fan fiction authors becoming published authors. I know that we here at BT, don’t have a problem with it, and are thrilled when a story we loved and adored as fan fic, gets the attention it deserves when published, whether it’s self-published, with a small publishing house or one of the bigger ones.

When I read the positive reviews of their published work on Goodreads by people who didn’t know it was fan fiction in the first place or maybe just didn’t read it before being published, that in itself proves to me that the work stands on its own.

I guess I feel like I need to clear the air about this point, because one of my favorite fan fiction writers, Savage7289, is now getting some of her fan fic work published and as well as her original work. I am thrilled for her, and want to share my praise of two of her books here. 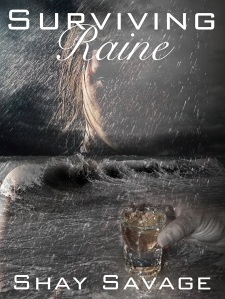 As the captain of a schooner catering to the elite on the Caribbean Seas, Sebastian Stark does his best to avoid any human encounters. Interacting with people isn’t his thing, and he prefers the company of a bottle of vodka, a shot glass, and maybe a whore. There’s no doubt he’s hiding from a checkered past, but he does well keeping everything to himself…

…until the night his schooner capsizes, and he’s stuck on a life raft with one of the passengers.

Raine’s young, she’s cute, and Bastian would probably be into her if he wasn’t suffering from alcohol withdrawal. As the days pass, DTs, starvation, and dehydration become the norm. Even the most closed person starts to open up when he thinks he’s going to die, but when she realizes their traumatic pasts are connected, it’s no longer the elements that have Bastian concerned.

He has no idea how he’s going to Survive Raine.

Reading this story for the second time was a wonderful reminder of why I love Shay’s writing style so much. She is an amazing storyteller, and she just has this knack for writing in a male’s point of view. 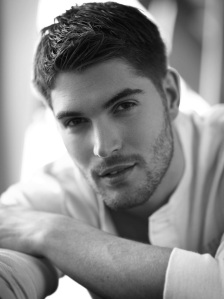 Sebastian Stark. He is quite the character. We start out realizing immediately that he’s choosing to live the hard and fast life. He wakes up wanting a drink, and goes to bed drunk. Dating normal women is not an option, because he is only interested in having sex. That’s it. His only friend is John Paul, his partner on The Oblation, the schooner ship that he lives on and runs as a business providing cruises on the Caribbean. It’s a simple life that keeps him basically numb.

It’s not until the unthinkable happens that we experience true emotions from Bastian. The ship is capsized in a huge storm, and he is stuck on a tiny life raft with one of the passengers, Raine. With each passing moment, we get to experience Bastian’s struggle with alcohol withdrawal and life or death situations. Even though, I knew the outcome of the story, I was still riveted by Bastian’s tortured thoughts and ideas. Despite those thoughts about his past and his self-worth, he proves himself over and over again, that he will always survive and make the difficult choices.

For once, it wasn’t just me I needed to look after. There was the annoying, questioning, tiny little piece of seriously feminine, soft, brown-eyed, doesn’t-take-my-shit, fucking beautiful young woman who didn’t stand a chance on her own that I needed to protect.

Raine Gayle. Talk about being at the right place, at the wrong time. She is thrown into this impossible situation with Bastian, and yet she is strong and takes everything in stride. She is also smart and kind. I love how she deals with Bastian. Everything really. His past. His addictions. Their connection to each other’s lives through her father.

For the first time in my life, I felt like I was where I was supposed to be and doing what I should be doing. I was complete when we joined, and the reason for my existence was suddenly revealed to me- I was here to save her and to love her.

There are some very dark scenes in this book, but everything is written so well, that it all makes sense. The ending is exactly as it should be, but leaves the door open for the sequel. The last chapter being told from a surprising POV. I am thrilled to death she is continuing this story. I am not done with Bastian, nor is he done with us. There is more tell for sure. He is not the typical hero, but he does what needs to be done for Raine. 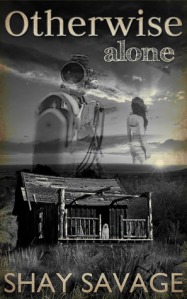 Lieutenant Evan Arden sits in a shack in the middle of nowhere, waiting for orders that will send him back home – if he ever gets them. Other than his loyal Great Pyrenees, there’s no one around to break up the monotony. The tedium is excruciating, but it is suddenly interrupted when a young woman stumbles up his path.

He has two choices – pick her off from a distance with his trusty sniper-rifle, or dare let her approach his cabin and enter his life.

Why not? It’s been ages, and he is otherwise alone…

So this a quick read at about 50 pages. I almost feel like I’m reading the prologue to an amazing adventure about to begin. Please don’t be mistaken at the short amount of pages that nothing interesting happens, because everything happens really fast in this one.

I think that is what surprised me the most. Shay is really good at building up the sexual tension between the characters in her work. Evan Arden is given an opportunity with this stranger, and he doesn’t waste it.  We get to experience what hot and fast sex is like, since we are in his head the whole time.

Lia Antonio. Personally I don’t think she is what she claims to be. There is definitely more to her story. Who wanders in the desert without provisions, claiming to be dropped off and left to make her way back to civilization?

At any rate, Evan and Lia part ways, and we are left as readers, wondering what the hell is going to happen next. I am so excited to climb into Evan’s truck, have Odin sit in my lap, and let him drive me off to the next destination. Apparently, it’s Chicago and I happen to live there, so I would be more than happy to be his tour guide. Bring it on…

**I was given an advanced copy of Surviving Raine from the author, but this did not influence my review in any way.**

You can purchase both books on Amazon and Barnes and Noble.

I give Surviving Raine, 5 outstanding stars, and Otherwise Alone, 4 amazing stars. I put both books on my “top shelf fantastic reads” on Goodreads.

One of Shay Savage’s forever fans.