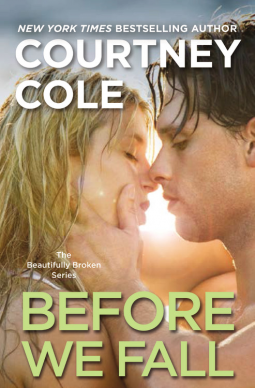 One dark moment was all it took to turn twenty-four-year-old Dominic Kinkaide’s world black. On the night of his high school graduation, a single incident changed him forever, and he became a hardened man-famous in the eyes of the world, but tortured inside. Now all he cares about is losing himself in the roles that he plays.

At twenty-three years old, Jacey Vincent doesn’t realize how much her father’s indifference has affected her. She is proof that sometimes it isn’t one specific moment that wrecks a person, but an absence of moments. She tries to find acceptance in the arms of men to fill the void-a plan that has worked just fine for her, until she meets Dominic.

When jaded Dominic and strong-willed Jacey are thrown together, the combination of his secrets and her issues turns their attraction into the perfect storm. It could change their lives for good-if it doesn’t tear them both apart . . .

I have become such a huge fan of Courtney Cole thanks to her Beautifully Broken series. This is book #3, and it’s my favorite.

Dominic Kinkaide is not an easy character to get to know or love, but I think that’s kind of the point. If you’re a “broken” individual then you aren’t going to be all hearts and flowers. However, I found Dom to be a very interesting character…one I wanted to understand better. I’m really glad I did, because it turns out that he’s worth it.

Jacey is fighting her own past mistakes.  I think she’s very relateable in that many women have the need to be “fixers”. She’s very direct and honest, and though she sometimes wants to give up on any type of relationship with Dom she doesn’t.

This couple have an intense attraction and chemistry, but it adds to the story that they don’t hook up sexually right away. That doesn’t mean there aren’t lots of steamy moments between the two. On the contrary the UST between these two will have you needing a cold shower, or ten.

This is the type of story that I truly enjoy reading because it hits all of my emotional buttons. I laughed, I cried, I raged, I swooned, I was surprised, and I fell in love. It’s well written and Cole does a fabulous job of balancing the high level of angst with moments of pure romance and sexual heat.

I’m giving this book a high recommendation, and I would suggest that it’s better to have read the first two books in the series.

My rating for Before We Fall by Courtney Cole: