Finding It by Cora Carmack 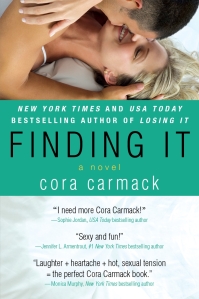 Most girls would kill to spend months traveling around Europe after college graduation with no responsibility, no parents, and no-limit credit cards. Kelsey Summers is no exception. She’s having the time of her life . . . or that’s what she keeps telling herself.

It’s a lonely business trying to find out who you are, especially when you’re afraid you won’t like what you discover. No amount of drinking or dancing can chase away Kelsey’s loneliness, but maybe Jackson Hunt can. After a few chance meetings, he convinces her to take a journey of adventure instead of alcohol. With each new city and experience, Kelsey’s mind becomes a little clearer and her heart a little less hers. Jackson helps her unravel her own dreams and desires. But the more she learns about herself, the more Kelsey realizes how little she knows about Jackson.

I realized that one of the books on my favorites for 2013 list was this incredible book by Cora Carmack, and I didn’t review here on BT. So in my effort to tie up loose ends, before moving forward in 2014, I am going to share with you, my thoughts on probably the best book in the Losing It series.

Kelsey Summers. She’s had my attention from the beginning, when she was trying to get Bliss some “action” in Losing It. I loved her “no holds bar” attitude to getting things done. I was definitely in denial as to why someone would live their life to such extremes. Cora’s decision to hold off on telling us why Kelsey was the way she was, was probably a smart one.

With each book in this series, we get more depth. I mean Bliss and Garrick’s story is light and funny, and pretty darn perfect. Cade and Max’s story is slightly darker with an edge. Kelsey and Jackson’s story is definitely more complex and emotional. Cora is capable of giving us all of the emotions of falling in love. The happy funny parts and the sad darker parts too.

Kelsey is hiding from her life and her responsibilities. She is traveling Europe with only her backpack and her father’s money. While I can’t relate to that, I do want to. I like Kelsey and appreciate that fact that her parents pay her no attention, so why shouldn’t she spend their money and live how she wants. Dancing. Drinking. Men all around her. Life’s a party right? Nothing counts.

Time started to disappear between frenzied hands and drips of sweat. There were more drinks and more dances. Each song faded into the next. Colors danced behind my closed eyes. And it was almost enough.

For a while, I got to be blank. A brand-new canvas. Untouched snow.

I’d checked my baggage at the door, and just was.

And it was perfect.

There was no room for unhappiness when squeezed between two sets of washboard abs.

I gave István a couple notes and sent him to get more drinks. In the meantime, I
turned to face Tamás. He’d been pressed against my back for God knows how long, and I’d forgotten how tall he was. I leaned back to meet his gaze, and his hands smoothed down my back to my ass.

I smirked and said, “Someone is happy to have me all to himself.”

He pulled my hips into his, his arousal pressing low against my stomach, and said, “Beautiful American.”

Right. No point expending energy on cheeky banter that he couldn’t even understand. I had a pretty good idea how to better use my energy. I slipped my arms around his neck and tilted my head in the universal sign of “kiss me.”

That was Kelsey’s life, and until she dealt with why, she was going to keep going in this downward spiral.

Jackson Hunt. I have to say that I do like him, but then I don’t. Because of the reasons as to why he just happened to be there for Kelsey at all of the right moments, or wrong moments depending how you look at it, I can’t help but hold it against him. There were a few opportunities where he could have been honest with Kelsey, but didn’t come clean. He may have had his reasons for doing so, but even now it doesn’t sit well with me. It makes for a good story though.

I couldn’t seem to walk in a straight line. My path kept veering toward his. Probably because I was drunk. Or his muscles were magnetic. Both completely plausible options.

My arm brushed his, and the sensation went straight to my head, electric and fuzzy, so I said the first thing I thought of.

He laughed once. “That’s because it’s almost dawn.”

“Not that kind of tired.”

“What kind of tired, then?”

“The bone-deep kind. The kind of tired that sleep doesn’t fix.

And there it is. Isn’t it? Just how long can someone live like this until it catches up with them and something bad happens.

This funny thing happens when you graduate college. You hear so much about being an adult that you start to feel like you have to become a different person overnight,
that growing up means being not you. And you concentrate so much on living up to the term “adult” that you forget growing up happens by living, not by sheer force of will.

I do appreciate the fact that Jackson does step up, and is there when Kelsey really needed someone. He also proposes a compromise to her. Let him lead her on an adventure. Give him 7 days for one kiss.

“I’m going to kiss you, princess. But not now, not when you’re telling me to. Not when it’s just something you want to check off a list. I’ll kiss you when it counts.”

They do go on quite an adventure together. They travel Europe by train, and spend some time in Italy. I loved that part of the story, because I recently went to Italy, and could totally visualize where they were. I think everyone should go. Leave your country and travel to another one. Get outside of yourself and experience the world.

Jackson does get Kelsey to confront her past and her parents, and it’s not an easy read, but it’s worth it in the end. He does a great job of making amends anyway. But I don’t want to leave this review on that kind of note. While I may not love Jackson, I do appreciate the fact that he is gorgeous, smart, caring, and will just about anything to protect Kelsey, especially from herself. The UST in this story is perfect in my eyes. I just love reading that.

Heat crackled across my skin. Hunt’s gray eyes bore into mine. And my gaze was drawn to his lips. Those lips. I had spent days thinking about those lips, maybe even days looking at them. I’d agonized over Hunt’s excuses and what might be keeping us apart, about what he wasn’t telling me. But here with the ocean at my back and the memory of that lock against the skin of my palm, I couldn’t think of a single reason. Or maybe I just didn’t want to.

I tipped my chin up, and he tipped his down. The world shrunk to include only the space between our lips, space that only our breath crossed.

My heart was about to beat out of my chest, and I swear I could hear his beating, too. I knew he wanted this just as much as I did. And I was tired of letting some imaginary line dictate my actions. So, I leaned in, and for the barest of seconds my bottom lip grazed his. And that small world, expanded, exploded, and we were at the fiery hot center of it.

Want to hear the best news? We get to see this adventure through Jackson’s eyes in Seeking Her. I think that that is just what I need to understand why Jackson did what he did. I know his intentions were in the right place, but could he have handled it differently? Definitely. At least in my eyes. 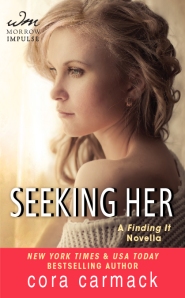 For me, Cora Carmack left the best for last in this series, because if you think that she is only capable of writing light and funny, then read this book. I think you could actually read this one on its own too, because Kelsey removes herself from everyone in her life back home, that it can totally stand alone.

I give this book 5 party-to-you-drop STARS, and put it on my “favorites” and “top-shelf-fantastic-reads” shelves on Goodreads.

Here is to another great year of reading. 🙂