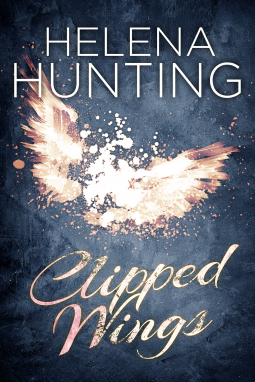 Today I am SOOOOO excited to be sharing an exclusive and very special outtake from Clipped Wings by Helena Hunting.

It was one of those days. Not a lot of clients scheduled and very few walk-ins, thanks to the crappy weather. Rain sucked. It drove people indoors, especially when it came down in a solid sheet. Chris, one of my business partners, had snagged the most recent walk-in and was currently in the middle of a very lengthy consult. He was having a great time talking the chick up. She had quite the rack and made no attempt to conceal it with partially buttoned blouse. There was so much cleavage going on it was almost impossible to look anywhere else but her chest. Chris was struggling to maintain eye contact with little success.

I on the other hand, had no client. It was only four in the afternoon and I had three hours to go before my sole scheduled client of the day arrived. I was bored as shit. If I were so inclined, I could set up for the appointment, but I was reluctant to leave my station. Doing so might mean missing on out on a hot-chick sighting. And I wasn’t referring to just any hot chick, but the one my Aunt Cassie hired to help out in her store across the street. She’d been working there for a few weeks now. Her name was Tenley. Ten-ley. Ten-leeeeee. Shit. Now I was just being a fucking loser, saying her name over and over in my head.

As a distraction from my distraction, I pulled a client file. I wasn’t due to start the piece for several weeks, but it wouldn’t hurt to work on the design. It was a highly detailed sleeve with several images that needed to be meshed together to make it flow. I taped all the inspirational pics to the edge of my desk. Then I sorted through my pencils, sharpening them all before I lined them up on the right side, so I could easily alternate between them for shading.

I started with the central image; a pin-up-esque version of a woman with dark hair.. As I sketched the outline of her body, my mind began to wander, as it usually did, across the street. I’d seen enough of Tenley that I could accurately envision her in my head. The convenient location of her apartment across the street from my condo, also afforded me an incredible view of her living room-slash-kitchen. Not long ago, I’d accidentally-on-purpose caught a fantastic glimpse of her wandering around in the privacy of her apartment outfitted in a barely there tank and shorts. It was as if the image had been branded into my brain. Then there was the time I caught her eating a cupcake.

I merged the two incidents, stripping Tenley down to nothing but the pair of skimpy shorts. Her hair went up into a ponytail, her bangs swept off to the side. I put her on a stool and added a pair of heels with one leg crossed over the other. The shorts were black, the tank white and almost sheer. In my mind, she wasn’t wearing a bra.

Her chin was tilted down, eyes peeking up. In her hand I placed a cupcake, mere inches from her mouth, poised to eat. To keep the focus near her face, I made the wrapper a vibrant shade of red, covered in tiny white polka dots. The cake within was vanilla though, because that was my favorite. The swirl of fluffy icing was topped with a cherry—no scratch that—way too cliché. A strawberry. A real one, not one of those fake gummie deals.

Her full lips were flushed pink, parted, as if ready to take a bite. She plucked the strawberry from the top. Her velvet pink tongue flicked out to taste the icing and then her lips closed around the luscious berry, eyes fluttering shut—

I looked up to see Chris standing in front of me, snapping his fingers in my face.

I swatted them away. “What’s up?” I asked, irritated that he was distracting me from the fantasy in my head. I was just getting to the good part.

He glanced down at my desk. “You missed that whole conversation? What are you doing?”

“What does it look like I’m doing?” I asked, glancing around the shop. It was empty but for those of us who worked in it. Lisa the bookkeeper was watching our exchange with interest from her post at the cash. Jamie, the third tattooist in the shop, stood up and wandered in our direction.

He raised a pierced eyebrow at me. “No need to get snappy, bro.”

“She’ll be back in a few days.” His eyes was trained on my desk. The slight furrow in his brow made him look more sinister than usual.

I followed his gaze to the art I’d been working on and frowned. While the girl had dark hair, she looked nothing like the image taped to the edge of my desk. She did however, look a whole hell of a lot like the one I’d just been fantasizing about.

Before I had a chance to hide the art, Jamie came up behind me and snatched it from my desk. “Interesting,” he said and took a step back, inspecting it closely.

“What’s interesting?” Lisa asked, sliding off her stool to come take a look.

“I’ve barely even started.” I grabbed for it, but Jamie held it out of reach. “It’s a rough draft,” I muttered, aiming for nonchalant.

Chris came around to check it out. My hope was that he would be too focused on her boobs to notice how much it resembled Tenley. That didn’t happen though.

“What’s with the cupcake? Is she supposed to look like her?” Chris pointed to the picture of the bikini clad woman taped to my desk. “Because she sure as hell doesn’t. I mean, she’s hot, but that’s not even the same face.”

Lisa plucked the sketch from his hands and passed it back to me. I shoved it in a folder. “Like Hayden said, it’s a rough draft.”

The tinkle of the bell above the door drew their attention away from me.

“Hi ladies,” Chris said, flashing a grin, “how can I be of service?”

Lisa gave me a knowing look before she returned to her post at the cash.

Can I just say once again how much I FLOVE Hayden? Yup, I sure can.

You already got your copy of this fabulous book right?!?