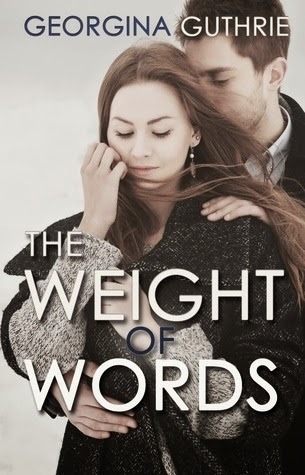 In Chapter 16 of The Weight of Words, Daniel confesses to Aubrey that he returned to her residence hall the night before after receiving an ominous message from Professor Brown. What exactly happened when he returned to Jackman?

Leaving campus that afternoon was possibly the most counterintuitive thing I’d ever done. Distancing myself from Aubrey after our talk at the Gardiner, when all I really wanted to do was spend the evening, and then the whole night with her in my arms…suffice it to say, I had no desire to return home alone.

Of course, that’s precisely what I did. I had no choice.

Back at the condo, I grimaced, once again surveying the boxes of books piled in front of the built-in bookshelves. Four weeks and I hadn’t made a dent in my unpacking. My apathy was crippling. Every night when I came home, I seemed to spend hours gazing out the windows at the Toronto skyline, or pouring my thoughts out on paper while drinking a bottle of wine or several glasses of scotch, incapable of accomplishing anything concrete.

I’d hit a wall on my PhD paper, the apartment was a shambles, and my life was upside down. I couldn’t live comfortably in such a state of disorder. The chaos fuelled my anxiety. It wasn’t a healthy situation. Perhaps I’d try to tackle some unpacking later.

First things first, though—I needed to call Martin to follow up on my absence. I wondered if he’d collected the students’ assignments or if he’d given them an extension. Way too frigging tired to contemplate reading anything, I was relieved not to have brought home a pile of marking.

The message light flashed on my phone. I dialed into my voice mail as I rummaged through the fridge for something to eat.

Please let it not be my dad.

It wasn’t my dad. It was Professor Brown. He sounded awful.

“Daniel, my boy, Martin here,” he said. “I don’t know how to say this. I hate to leave this as a message. I’ve just been informed of a terrible accident, something tragic, one of our students, a young lady from your Friday tutorial, lovely girl…it’s a terrible waste…please, call me as soon as you can. We need to talk. Call me.”

A terrible accident, something tragic, a young lady from my Friday tutorial—a terrible waste…  Someone had died? Is that what he was saying?

My knees buckled and I dropped into a kitchen chair, staring at the phone in my hand. Almost two hours had passed since I’d left Aubrey at Jackman. What if she’d decided to go out somewhere, maybe shopping or out for dinner, and been hit by a car careening out of control on the slippery roads?

This couldn’t be happening. Not now. What had I done to deserve this? Was God punishing me for my unethical behavior? What was I supposed to do? Sit and wait for Martin to call? Waiting for a return call would kill me.

Fuck, fuck, fuck! What could I do? Then I remembered—Jeremy—he’d snagged Aubrey’s phone number on Saturday night at the house!  I called Jeremy’s cell. Voice mail again. I didn’t bother to leave a message. Instead, I grabbed my cellphone and typed in a text message.

I waited, staring at the screen, willing him to reply.

Why wasn’t he answering?  Was his phone off?  No, damn it—he couldn’t even receive my message—he was on the frigging subway! Without thinking, I hauled myself out of the chair, pocketed my car keys and cell phone and raced out of the apartment and down to the parking garage. I would drive to Jackman to find out for myself if Aubrey was okay.

She had to be okay. God, please let her be okay. I made a pact with God. If He’d let her be all right, I would do anything, anything at all to prove myself worthy of His grace. I drove like a bat out of hell, cursing the red lights which seemed to be conspiring against me. Traffic was sluggish, the roads treacherous. Had everyone forgotten how to drive? Jesus!

An interminable twenty minutes later, I was turning onto Aubrey’s street, pulling up to the curb haphazardly and jumping out to run toward her building. In the lobby I scanned the wall of buttons beside the mailboxes. There were no names, just apartment numbers and entry codes. What the hell?  Fucking university security!

As I was standing there in a frenzied state, two girls walked in, one of them carrying a keychain. Swallowing my panic, I gazed at them, doing my best to look like a lost puppy. One of them, a cute little redhead, said, “Did you forget your keys?”

Her friend giggled. They had to be freshmen.

“No, I’m here to visit a friend—Matt Miller? But I can’t remember his apartment number. Guess I’m out of luck,” I said, trying to look innocently sheepish.

“Oh, Matt lives on the second floor,” the redhead’s friend said, not missing a beat. “Isn’t that right, Mel?”

“Yeah, definitely the second floor. I don’t know what apartment, though. We could let you in, but—”

“—oh, that would be great,” I interrupted. “As soon as I’m up there I’ll remember where his apartment is. I just can’t for the life of me remember the number,” I said, shrugging helplessly. Frankly I had no clue what I would do once I got up there, but I’d cross that bridge when I got to it.

The redhead unlocked the door. I pulled it open, ushering them both inside. “After you,” I said, with a grandiose hand gesture. Giggling in unison, they headed to the elevator.

“Thanks, ladies,” I said, smiling widely. “I think I’ll take the stairs. You have a good night.”

“You too,” they said, giggling again.

I leapt up the stairs, two at a time. As I opened the door to the second floor, I was taken aback by the length of the hallway. There had to be thirty apartments. Where to start? I checked my phone. Still no message from Jeremy. Professor Brown would have called by now if he’d heard my message. I was in limbo.

Behind one of these doors, Aubrey had to be alive and well. She had to be. But what could I do? I couldn’t knock on doors, canvassing for signs of life. I walked down the hallway, stopping to listen as I passed each apartment. I heard music, blaring televisions, laughter, a couple in the throes of some epic sex…

This was a bad idea. If Penny could see me now, she’d definitely be filing my behavior under “irrational.” I was considering leaving to go and wait for the phone call that would either destroy me or restore my faith in God when I heard it—outside apartment 2500—a voice that I simultaneously cursed and rejoiced in. Matt calling out Aubrey’s name.

“Aubrey! Aubs?” He was shouting to her from somewhere within the apartment walls.

I bowed at the waist, resting my hands on my knees as if I’d just spent thirty minutes on the soccer field. Aubrey was safe. My relief was replaced almost immediately by violent jealousy as Aubrey answered her roommate’s call.

“What is it sweet cheeks?”

Sweet cheeks? What the fuck?

“Can you bring me a towel? I forgot mine and I’m buck nekkid in here.”

Super. He was in the washroom. Naked. Mere meters away from Aubrey. My Aubrey. I wanted to throttle him with my bare hands. I grabbed the doorframe, my knuckles turning white as I restrained myself. I was not enjoying the fury Matt’s existence was stirring in my soul. Their exchange continued, and God help me, I hung on their every torturous word.

“You just keep your sweet cheeks in there, cowboy. Hang on,” Aubrey called to him.

“Possess your soul in patience. I’m on the verge of perfecting an exquisite risotto here. I have to stir it for another minute.”

“Aubrey!” He was actually bellowing now.

“All right!  I’m coming! But I’ve just spent fifteen interminable minutes stirring this fucking risotto. If you make me ruin it, so help me!”

I couldn’t help chuckling. There she was—my sailor poet. I leaned my forehead against the door, sighing deeply. Then I heard laughter and squealing. What the hell was going on in there? I stood with my hands curled into fists, my forehead resting between them against the cold metal of the apartment door. My imagination would be my undoing.

Dying to knock, wanting nothing more than to interrupt whatever was going on in that room, I balanced precariously on a knife’s edge. I was so relieved to know she was okay, but my relief was tempered by the jealousy burning in my chest. I wanted to be the one sharing these lighthearted, private exchanges with Aubrey. But as much as I longed to bash the door down, making my presence known here was the worst of ideas.

Trying to focus on the relief I felt, I tore myself away from the door and walked toward the stairs. Everything was fine. Aubrey was alive and well. No one had seen me freaking out in front of her door. I jogged lightly down the stairs, through the lobby and out the front door, welcoming the cold evening air, despite my lack of coat.

In the car, I rested my head on the steering wheel, breathing deeply. God wasn’t punishing me after all.

Thanks so much GG for sharing this with us!!!