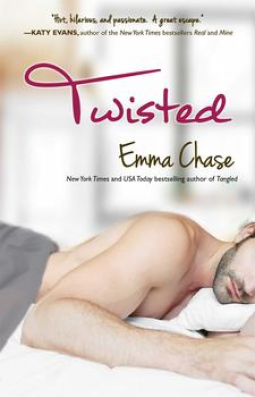 When spontaneous and carefree meets cautious and responsible, falling in love can get just a little Twisted

There are two kinds of people in this world: the ones who look first, and the ones who leap. I’ve always been more of a looker. A planner. Cautious. Then I met Drew Evans. He was so persistent. So sure of himself. He made it easy to leap with him.

Did you think Drew and I were going to ride off into the sunset and live happily ever after? So did I. But life is about choices, and Drew already made his. In fact, he tried to decide for the both of us—but you know that’s not my style. So I came back to Greenville, to spend some time alone . . . sort of.

Because old habits die hard, and sometimes you have to go back to where you began before you can move ahead again.

It’s been almost a year since I had the pleasure of discovering the very talented Emma Chase when I read Tangled.  Emma  immediately jumped onto my list of favorite authors with her gift of combining romance, comedy, and hot, hot heat. She also gave me Drew…a book boyfriend who is so over the top arrogant at times that you might be tempted not to look further and discover that under all that idiocy is a man worth getting to know. He SO is. By the time I was done reading Tangled, Drew had firmly and irrevocably ensconced himself into my heart, and I was eagerly awaiting the day I could read Twisted.

Twisted begins two years after the end of Tangled, and it’s very different in many ways. It’s told from Kate’s POV instead of Drew’s. Smart and feisty, Kate can stand her own with Drew, matching whatever he’s dishing out. It’s one of the things that I love about her and this story. She is also the woman who finally made Drew understand that there was actually more to life than random meaningless hookups. Things are progressing for this couple which makes me happy, happy, and happy. The heat is amazing between these two. I mean it when I say that Emma can write scorching scenes like nobody’s business. It’s one of the reasons I love her, but I digress…

Life is good for one of my most favorite couples until about the 30% mark…then...HOLY CRAP! Let me repeat myself…HOLY CRAP!

A clusterfuck of monumental proportions happens. It was unexpected, devastating. I ranted. I raged. I may have shook my kindle, hoping it would be a mistake and the words would rearrange themselves. They didn’t. So, I did the only thing I could and kept reading. At this point I feel I have to interject something. I really shouldn’t have been as surprised as I was. I did after all read the synopsis which foretells that something bad is going to happen. Still, I was shocked and sad. Normally I don’t read other reviews of a book that I’m reviewing until after I’ve written mine, but I was so curious as to how others reacted that once I finished the book I did go and look at several on Goodreads.

There was an awful lot of blaming going on…peeps choosing sides as to whom was more at fault for what happened. Me? I think they were equal in their stupidity of the choices they made based on… a secret that shouldn’t have been kept by Kate, an erroneous assumption then made by Drew, and no communication made by either. It took what seemed like forever til my once happy couple finally got their acts together enough to talk things out, and I couldn’t have been more ecstatic once they did. The resolution had another surprise in store for me, but it wasn’t a bad one, and in the end it was probably a pretty smart idea. Drew and Kate do get their HEA and in the end that’s what matters most to me because I’m invested in them as a couple.

A few last things in wrapping up. I floved the epilogue. For one thing it’s in Drew’s POV. I’m not gonna lie…I prefer Drew telling the story, but it made sense for the majority of this book to be in Kate’s. Also, this book ramped up the angst level and I mean way high, but don’t fear…the comedic brilliance of Emma Chase is in full force as well, so I’m giving a high recommendation that you read this book.

My rating for Twisted by Emma Chase:

Katiebird reviewed Twisted too and you can read her review here

Now I’m looking ahead to reading Tamed which is due for release on July 15th.