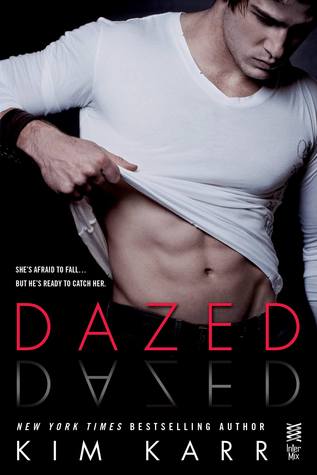 Jagger Kennedy never went looking for fame, he just fell into it. After scoring a major modeling contract, his clean-cut good looks and charm catapulted his career. But when his actress girlfriend breaks his heart, he moves to L.A. to try his hand at acting. He needs to make a change, and the last thing he’s looking for is love…

Aerie Daniels is a woman in control … until she meets Jagger. Her surprising connection with him leaves her stunned, and it’s unlike anything she’s ever felt. But just when she lets her walls fall, she makes a startling discovery about him that breaks her fragile heart into a million pieces.

To keep from losing the one woman he can’t bear to be without, Jagger is willing to give up anything—including his career. But even that might not be enough to regain Aerie’s shattered trust…

Kim Karr is one of my go to authors. When she writes a book  it’s pretty much a guaranteed good read for me. Normally, I don’t read many novellas because I’m a fan of longer books, and sometimes the shorter stories just feel incomplete to me. Not so with Dazed.

Kim was able to tell a great story with characters that were very complete and irresistible. I think it’s helpful if you’ve read the other books in the Connections series first but it’s not necessary. Think of it as an enhancement not a requirement.

Jagger Kennedy is certainly swoonworthy. Hell…his name alone had me wanting to know more about him. That’s another great thing about Kim…she’s really talented at picking cool and unusual names for her characters. Call it a personal quirk of mine, but I have a thing for great names. When Jagger meets Aerie they both feel an inexplicable connection that grows as they get to know each other. Honestly, the relationship didn’t feel rushed even though it was contained in a shortened story. I think that just speaks to Kim’s storytelling ability that she’s able to pull it off so well.

Is there chemistry between these two? O yeah…big time. The reader is treated to romance and heat with just enough angst and heartfail to keep things interesting without being overwhelming. I enjoyed it from start to finish and I think you will too. That’s why I’m giving it a high recommendation. Dazed is a quick read but it contained all the necessary ingredients to make this reviewer very happy.

‘Oh my God. The things his touch does to me. I don’t know if I should melt away out of embarrassment or jump for joy out of elation.’

Do I wish that it had been longer? Absolutely…but only because I truly loved the story and the characters…not because I felt short-changed in any way. Dazed releases on April 1st, and I think it’s the perfect little snack while we wait for the next full length book in the Connections series…Mended which releases on June 3rd and is available for pre-order now.

My rating for Dazed by Kim Karr: