Today I’m happy to be sharing an exclusive excerpt of THEIRS TO CHERISH by Shayla Black. 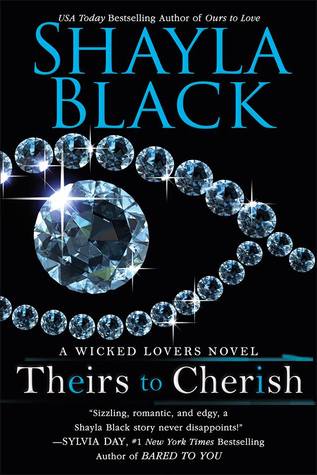 The perfect place for a woman on the run to disappear…
Accused of a horrific murder she didn’t commit, former heiress Callie Ward has been a fugitive since she was sixteen—until she found the perfect hideout, Club Dominion. The only problem is she’s fallen for the club’s master, Mitchell Thorpe, who keeps her at arm’s length. Little does she know that his reasons for not getting involved have everything to do with his wounded heart…and his consuming desire for her.

To live out her wildest fantasies…
Enter Sean Kirkpatrick, a Dom who’s recently come to Dominion and taken a pointed interest in Callie. Hoping to make Thorpe jealous, she submits to Sean one shuddering sigh at a time. It isn’t long before she realizes she’s falling for him too. But the tender lover who’s seducing her body and slowly earning her trust isn’t who he claims…

And to fall in love.
When emotions collide and truths are exposed, Sean is willing to risk all to keep Callie from slipping through his fingers. But he’s not the only man looking to stake a claim. Now Callie is torn between Sean and Thorpe, and though she’s unsure whom she can trust, she’ll have to surrender her body and soul to both—if she wants to elude a killer…

“You’re away with the fairies, Callie. Get out of your head,” Sean growled. “Focus on me. Or we’ll end tonight now.”

That would be better, smarter. And everything inside her rebelled at the thought of Sean leaving. She clung, in fact. After all, she never knew if she’d have a tomorrow with anyone.

“I’m sorry. I don’t mean to be preoccupied.”

His face softened a bit. “What’s troubling you?”

A million things she could never confess. She plucked at the first excuse off the top of her head. “You don’t want me.”

He grabbed her face in his hands. “You have no idea how untrue that is, lovely. I fantasize about laying you out under me and sinking so deep inside you that you’ll not ever forget the feel of me. Never

doubt that I want you.”

His words made Callie flush hot all over. “Don’t you think sex would bring us closer?”

A wry smile crossed his wide mouth, and she couldn’t resist brushing her fingers through the waves of his dark hair. He was so blindingly handsome. He’d been her perfect revenge against Thorpe’s

indifference. She just hadn’t planned on him stealing his way into her heart. And now she had no idea what to do.

“It’s a tempting notion, isn’t it? But I know me too well. Once we start that, I won’t stop. And we’ve far too much trust to grow between us to be distracted. I also know you. Sex is easy, isn’t it? True

intimacy is hard. I don’t think you’ve ever had it, and you’re a bit too good at dodging it. I’m looking for more than a fuck, Callie. I want the real thing, and I won’t rush because my cock is aching.”

and then. Perversely, that had never attracted her. Sean’s big heart did, and she feared that she would break both his and hers before the end.

Maybe this time will be different. Maybe the past will stay there. Four years is the longest you’ve stayed in one place. Maybe it’s time to stop running and finally live.

“That’s a girl.” Sean eased her to her feet and led her back to the padded table.

A glance up proved Thorpe had gone. Probably for the best. He was far too controlled and sexual for her. If she ever truly put herself in his hands, he’d pry her soul wide open in no time at all. She couldn’t take that risk.

As soon as the gorgeous Scot helped her onto the cushioned surface, she stretched out. He quickly secured her cuffed ankles. That didn’t fill her with too much panic. Then he grasped her wrist and began to clip in one of the cuffs. Almost immediately, her trembling began again. Callie gritted her teeth and fought to give in to Sean. She wanted to. God knew she did.

It wasn’t that she didn’t trust him. But what if someone recognized her? What if the police busted up the joint? What if she needed to flee and couldn’t?

She ought to be wondering what she was going to do if she failed again and he left for the night. Or for good. She didn’t want to be without him, and that kind of desperation was so dangerous . . .

Callie forced herself to comply. Instantly, her other senses jumped in. A woman in the far corner was having a very noisy orgasm. A male sub in the vicinity of the row of St. Andrew’s crosses grunted with every lash of the whip from his top. Somewhere nearby, she heard one of the dungeon monitors speak in low tones. Her own labored breathing gradually canceled it all out. Her thundering heartbeat did the rest until she focused solely on Sean.

“Summer.” Callie swallowed. She missed that horse. The little brown filly had been her most constant companion after her mother’s death. No doubt, the mare was dead now. She’d never had the

chance to say good-bye to her four-legged friend.

She let loose a ragged breath.

“Excellent,” he praised as he bound her cuffed her wrist to the table.

Her entire body tensed. She dragged in a harsh breath. Her heartbeat ramped up even more. Her palms began to sweat. Excitement and fear mingled into a heady cocktail drugging her veins.

“You’re making progress. I’m proud of you.” Sean cupped her cheek. “Relax. Trust me. Put yourself in my hands.”

How wonderful that sounded. How tempting . . . She nestled into his touch, forcing back a swell of devotion that was nothing more than a waste.

Callie wasn’t one of those women who didn’t know why her soul cried out to submit. It didn’t take Freud to understand that a girl who’d spent nearly a decade being entirely responsible for her own

welfare in a life-or-death struggle sought to turn all of that over to a Dominant partner for his broad shoulders to bear. Of course, she also wanted her family alive and whole as well. She always wanted

what she couldn’t have.

Gawd, she needed to turn out the lights on this pity party and give Sean all she could now. Tomorrow, she’d apologize for being much less than he needed, then sever the ties between them—before

she could no longer find the will. Of course she’d lie and wish him well in his quest to find another submissive who could be his true love. Watching that would be too painful, so she’d soon have to

leave. Sadly, Thorpe wouldn’t miss her much, either. No one would. Exactly as she’d planned it.

The realization wrenched her heart.

Callie had been desperately ignoring the writing on the wall for months. She’d allowed herself to become emotionally compromised and far too relaxed. Sean kept prying deeper into her psyche. If she

wasn’t careful, it wouldn’t be long before he put two and two together. The questions he asked already made her nervous.

Maybe the time to depart Dominion had already come. No, she knew it had. She needed to leave everything behind. Pack up and move on. The sooner the better.

She heaved in a cleansing breath and shoved every thought from her mind, centering herself on his presence and her need to submit to him just this once…

“I’m fine, Sir.” Before she lost her nerve, she raised her other arm above her head, an offering of her trust in him.

“Finally.” His fingers curled around her, warm and protective, his thumb stroking over the vulnerable inside of her arm before he fastened down her last cuff. “Thank you, lovely. You look beautiful bound for me. Your trust is heady.”

And scarier than hell. “I know it’s not much.”

“Can I open my eyes for just a minute?”

Sean paused. “Do you need to see me?”

Her lashes fluttered open, and she focused on him in the bright dungeon. Square face, sharp jaw, dark goatee, strong nose, muscled body. A furrow seemed permanently notched between his heavy brows. A little scar sat under the corner of his right eye, and she would have sworn it came from the nick of a bullet if he seemed like that kind of guy. Everything about him looked so masculine and aggressive. Yet he treated her so tenderly. If she had special-ordered the perfect man, he would be Sean. No doubt he’d wondered a hundred times over what he’d done to earn her distrust. The thought made her sad.

If she ever wanted to know what submission felt like, what Sean felt like, before she moved onto her next identity, she was going to have to give in this once.

Thanks to Courtney at Penguin for this!

2 thoughts on “Exclusive Excerpt! THEIRS TO CHERISH by Shayla Black”