Today we begin our discussions of Clipped Wings by Helena Hunting with chapters 1-6. 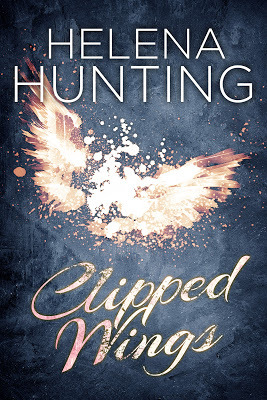 What are your initial thoughts about Hayden during these first six chapters?  Is he someone you’d be attracted to, or someone you’d stay away from? Why?

Tamie: I was surprised that I had such an intense reaction to Hayden so immediately. Usually it takes me a few chapters to warm up to a new guy that I haven’t encountered before, but I felt a strong connection to him right away. Maybe it was because he’s such a smart ass, or maybe because I admired how he doesn’t seem to care what the world thinks about him. He is who he is and he doesn’t pretend to be anything else.

Elena: I felt the same way as you, Tamie. I was immediately drawn to Hayden. Probably also because the first chapter is told from his point of view, and so we were able to enter in his head from the very beginning. He’s someone I’d want to get to know more closely, certainly.

Tenley seems to have two sides: on one hand she’s very shy, so much so that she’s almost afraid of even looking in Hayden’s direction. On the other, she has a lot of steel on her, showing almost a hint of rebellion, like Hayden says. So what’s your first impression of Tenley? Do you like her?

Tamie: I’m fascinated by Tenley. I guess because she seems so full of contradictions. It’s obvious that she’s both attracted to and uncomfortable around Hayden. She’s shy and timid, yet there’s a fiery side to her as well. She’s extremely smart, but she’s also very creative. She’s gone through something horrific emotionally and physically, and she’s trying to work through all the damage she’s suffered.

Elena: I think Tenly is someone we all can relate to. I believe every one of us has a shy and a rebel side. She’s a bit uncomfortable around Hayden, and to me that’s completely understandable — Hayden seems the type of guy that can overwhelm you…I can’t wait to see how things between them will progress, and how Tenley will react to him.

What do you think of the first interactions between Hayden and Tenley, which Hayden tells us about in chapter 1?

Tamie: I loved that Hayden was both intrigued and attracted to Tenley. He wants to know more about her, but he tries to restrain himself somewhat because he realizes how skittish she is around him. I love how observant he is, noticing how she reacts not just to him but to others.

Hayden and his friend Chris have a rule…Do you think this is a good rule? Why or why not?

Tamie: Based on why it was put into place I think it’s a very good rule. For starters they need to be able to have a good working relationship with each other since they work in a fairly confined environment. I also see the possibility that hooking up with clients could be dangerous on a different level. There’s a certain level of intimacy and trust needed between tattooer and client if the piece is large/intricate and that could be put into jeopardy if the relationship evolved into a sexual one… especially if it was a random thing for one but not for the other.

Elena: Probably this business called for this kind of rule, since getting together with a client could ruin their friendship and, consequently, their collaboration. It’ll be interesting to see, though, if they’ll have the strength to respect it or not…

We’re just at the beginning of the book and Hayden seems already pretty possessive towards Tenley. Do you think it’s just lust or that he might be feeling something more?

Elena: It’s hard to tell at this point of the story, since we’re at the very beginning of the book, but I believe Hayden might feel something more than just lust or attraction. He wants to get to know her, not just jump her, so to speak, and that speaks volumes.

Tamie: Even though it’s early in the book I get the sense that it’s more than just lust. Hayden is definitely holding himself back in order to try to get to know her better. Clearly he’s very attracted to her, but beyond that he already has strong protective feelings towards her. I don’t think he views her as a challenge to conquer and once accomplished he’d lose interest. No…I really think she’s gotten under his skin in a very different way, and even he doesn’t understand it fully at this point.

We get a few glimpses of what is a very tragic event in Tenley’s past. What were your thoughts when these first bits of information were revealed?

Tamie: Yikes! To have gone through what Tenley has both emotionally and physically explains a lot about her personality and her hesitancy. I don’t just mean toward Hayden, but in rebuilding her life in a way that was very different from the one she led. She’s exploring while still healing which speaks to her courage and strength in my opinion.

Elena: I agree, Tamie. My heart immediately ached for Tenley. When something that painful happens in the past, there are inevitable repercussions also in the present. I wanted to hug Tenley so much. She is hurting and that’s obvious. I really want her to find some solace.

At one point Hayden says to Tenley that piercings, tattoos and any kind of modification can be cathartic because it’s the promise of change. Do you agree with him?

Elena: Yes, I do. Everyone has his own ways of seeking catharsis and tattoos can be a means through which to reach that.

What were your thoughts on Sienna and the confrontation she had with Hayden outside The Dollhouse?

Tamie: Well she’s obviously a total bitch, and this won’t be the last we see of her. She’s one of those that doesn’t want to let go for whatever reason. I liked how Hayden handled things. He was pretty damn clear about the fact that he doesn’t want to have anything to do with her.

Elena: Sienna makes my stomach churn already. Definitely one of the villains of the story. I don’t like her at all, and I wish she left Hayden alone.

Tamie: I had a whole bunch…

“A surge of energy coursed through me at the full body contact, and I bit back a groan as her ass came flush against a suddenly very appreciative erection.”

“But there’s still gratification in the pain, yeah?”

“The only thing you know about me is the dimensions of my dick.”

“I mean seriously, is there a goddamn key fairy that just  up and always with my shit so I can’t get into my apartment?”

Elena: “I think you’d look good with my art on your body.”

Elena: When Hayden and Tenley talk in the basement.

Tamie: The basement scene and anytime Hayden tries to interact with Tenley 😉

We’d love to hear your thoughts on these first six chapters…either on the questions we posed or on something we didn’t discuss.

Don’t forget if you have a question you want to ask Helena about Hayden, Tenley, Clipped Wings, or about her writing…leave it in the comment section after the post, or email it to bktemptations@gmail.com Questions need to be in by Wednesday afternoon, and we’ll include them and the answers in next week’s discussion.