Joining in our blogiversary with an exclusive excerpt from Devoted is Bianca Giovanni! 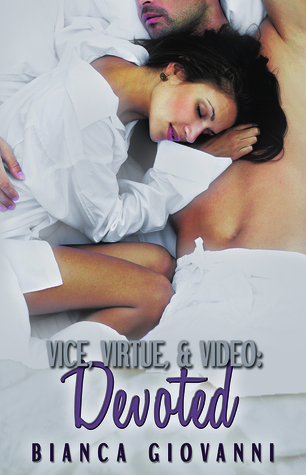 Book Four in the Vice, Virtue, and Video Series by Bianca Giovanni

I laugh loudly at that claim. It’s actually pretty accurate.

“It’s was so obvious, though,” he says, giving me a humorously critical look. “You talked about her constantly, you used to fuckin’ stare at her all the time, and you’d say how you thought she was beautiful, but you never wanted to just come out with it and say you wanted her. Everybody knew, but you thought you were slick.”

Now Lola bursts into laughter, and she pokes my ribs while she nods in agreement with Keegan. I’m sitting here trying not to turn pink while both of them gang up on me for my lasting obsession with my girl.

“He’s totally exaggerating,” he replies with a little more shyness. “I just meant that technically he could steal a pair of your panties, if he knew someone who wanted them. I didn’t specifically ask him to do it for me.”

“So you were a hypothetical perv?” she teases.

“It wasn’t pervy,” he says, starting to turn red. “It was just an idea I was throwing out there.”

“Kind of like when you had the idea to ‘accidentally’ cop a feel that time when everybody was crammed in my car?” I continue to give him shit.

“I remember that!” she exclaims with a laugh. “I kept wondering why you were trying to hook your arm around me like that.”

“That was…I was…it wasn’t like that,” he says, totally embarrassed now.

“And now I’m the only one who gets to cop a feel,” I joke, throwing my arm around her shoulders and giving her breast a quick squeeze.

“James!” Lola playfully punches me in the chest.

Keegan claps his hands as he laughs hard.

“If you’re both finished discussing my tits, maybe we can figure out what we want to order.”

Bianca is giving away an e-copy of ALL four books in the series!

Find Bianca Giovanni on Amazon, and read the whole series in order!

Thanks so much for the excerpt and fabulous giveaway Bianca!!!

One thought on “Blogiversary Blowout: Exclusive Excerpt from Devoted by Bianca Giovanni!”