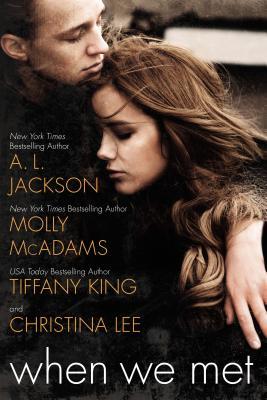 Earlier today I posted my review for When We Met, telling you why I was recommending it. I also said I’d share some teasers, excerpts and a fabulous giveaway with you, so here you go 🙂

Behind Her Eyes by A.L. Jackson

Now I could feel him, his eyes all over me, caressing me slowly, up and down.

I let all my insecurities drift away as I swayed in time to the music, in sync with the throb of the  crowd and the intermittent lights that glowed against my lids.

A charged moment passed, before strong hands found my hips and gripped them from behind. For a beat, I stiffened, before I again gave in to this sublime release. And again, he felt good. Right. All this intense energy that ricocheted between us wrapped me up in a frenzy of nerves, alight and alive. The smell of him took me whole, all soap and man and sex.

My heart beat frantically, racing to keep up with my thoughts that were spiraling out of control. A shimmer of fear slithered through me, before he pulled my back into the safety of his firm chest. And that was what I felt. Safe. With him, and I didn’t know why, and I was searching inside myself for resolve, for the commitment I’d made to never allow myself to be so easily played again. But it was just out of my reach.

Darryn held me close, our bodies moving in time, like we shared the same breath, the same space. I leaned back, my head on his shoulder as his face found the curve of my neck. Chills sped, spinning my body into a violent cataclysm of need. He let his hands roam, palms pressing hard as he ran them down the front of my legs, spanning them wide as he trailed them back up to my hips and over my stomach. Fingertips dipped into my ribs as he slid them up the curve of my sides, and he lifted my arms as he went, in the same fluid motion fastening my hands around the back of his neck.

All those butterflies scattered, a clash of discordant wings that fluttered haphazardly through my insides, leaving my stomach in a coiled mess of confusion and need.

Why him? Why now?

Holding me close, he brushed his mouth over the shell of my ear, his whispered words injected directly to my manic heart. “Goddamn, Misha. What are you trying to do to me?” I suddenly found it impossible to breathe, because it was him who was slowly undoing all the fibers of reservation woven through my weakened spirit.

“Can’t get you off my mind.” He leaned in closer, his hand sweeping up my stomach. Fingers brushed between my breasts, and I released a sharp gasp. “Been dying to touch you,” he murmured low.

SAVING ME by MOLLY McADAMS

“I’m about to embarrass the hell out of myself, but I don’t care anymore. I feel like when I’m near you, I’m safe, and it makes no sense to me. It is the weirdest feeling to have with someone I only know three things about.”

My eyebrows rose at that and I turned to fully face her. “Three?”

“Yes. Three things. Your name is Kier, you’re extremely quiet, and you are the biggest puzzle I’ve ever tried to figure out.”

“Yes!” she said in exasperation.

That had to have been the most backward statement I’d ever heard. “And why am I a puzzle?”

“Because of what I just told you. I don’t know you, you don’t even talk to anyone, and I feel safe when you’re near me! Why is that? I feel like I’m going crazy because all I’ve been able to think about for these past two weeks is you, and how every time you open your mouth it’s like déjà vu, and I just—I don’t know what’s happening.” Her green eyes were massive and she looked like she was on the edge of losing her shit.

I took a few steps toward her and lowered my voice. “Calm down, Indy. You’re fine.”

“I just don’t understand,” she said loudly, the pitch of her voice rising. “Do you believe in past lives?” she asked suddenly.

I paused, a laugh slipping past my lips. “I’m sorry, what?”

“Past lives? Like that whole stupid YOLO saying is really just bullshit, because we’re about to get another shot down the road?”

I tried to contain my smile, but she was really fucking adorable when she was like this. “What does that have to do with what you’re freaking out over?”

“In stories with soul mates they find each other no matter what in every life. And it’s like they have a weird connection they can’t explain.”

I closed the distance between us and dropped my head so I was looking directly into her eyes. “Are you saying we’re soul mates?”

“No!” she said, horror lacing her voice, her cheeks filling with heat.

I laughed and took a step back. “I’m teasing you, Indy. And no, I don’t believe in past lives. I think we have this one, and that’s it.”

She sighed, and her body visibly relaxed. When she spoke again, she sounded exhausted—and in a way, defeated. “I don’t, either, but I can’t figure out how to explain this feeling like I know you.”

I ground my jaw for a few seconds as her green eyes held mine. “Because maybe you do know me. You’re just not ready to remember why.”

Fouling Out by Tiffany King

The warmth inside the building was soothing after walking from the car outside. I felt mildly disappointed when Dalton dropped his arm from my shoulders, until he reached for my hand. As we strolled along, I became hyperaware of how something as innocent as handholding could become somewhat erotic while sipping wine together. Dalton slid his thumb across the top of my hand in slow methodical strokes before gently caressing my pulse point. The hairs on the back of my neck felt as if they were standing on end. Each sweep of his thumb was a sensual dance with my sensitive skin, making it tingle.

It was becoming apparent to me that it might have been a bad call on my part to skip lunch. Between the scent of Dalton’s cologne and the alcohol I was consuming, I was already feeling slightly intoxicated. I nibbled on a few cubes of cheese to attempt to alleviate the buzzing in my head. Dalton’s breath teased my neck, making me shiver in a good way. I should have put some distance between us so I could regain my bearings, but instead I snuggled closer to him, wishing we were somewhere else with a lot fewer people around.

All the air escaped my lungs as Dalton slowly captured a bead of wine from my bottom lip with his finger. I watched with bated breath as he moved the finger to his own mouth, sucking the drop of wine. It was all I could do not to moan as my insides turned to putty.

“You need to stop looking at me like that,” Dalton murmured in my ear.

“Like what?” I licked the rest of the wine off my lip with the tip of my tongue.

This time it was Dalton who groaned softly. Placing his hands on my hips, he slowly backed me into a dim corner, away from prying eyes. “Like you’re thinking how great it would feel if I hoisted you up on that wine barrel table over there with your legs wrapped around my waist.”

“Are you sure that’s not you thinking that?” My hips responded almost instinctively as he pulled me snugly against his body. I could feel him, rock hard, pressed to my stomach. The wanting desire I had been keeping at bay from the moment he showed up at my house looking practically delectable with low-riding jeans and a black V-neck sweater that accentuated his well-toned chest was threatening to explode.

Beneath Your Layers by Christina Lee

I motioned for the bar. “Want me to get you a soda or a water?”

Chloe stared at me for another long moment before she said, “No, thanks.”

We listened to the next song quietly standing beside each other, lost in our own thoughts. Until she turned to me and said, “Truth or dare?”

“Dare,” I said, almost breathless. Given her mood, maybe she’d give me something good this time.

“Your turn, Blake,” she said. “Do something spontaneous.”

My fingers trembled from wanting to touch her so badly and all I could think about was doing just that.

“You sure that’s what you want?” I said, turning and backing her against the wall.

“Yes,” she breathed out.

“Something spontaneous or something I’ve been thinking about doing for days?” I said, my lips coming closer to hers. “Maybe weeks?”

My head swung forward, our foreheads practically touching. Fluttery breaths were escaping her lips. I place my arms on either side of her head and she bit down on her lip.

My heart thrashed in my chest and all I could think about was how desperate I was to kiss her, but how nervous I was to blow this opportunity.

So I attempted to read her signals and they were definitely mixed. Her eyes flitted between panic and lust.

When I pinned my hip against hers, I could’ve sworn I heard a low moan in the back of her throat.

My stomach was in my throat. Fuck, either I’d scared her or I’d been reading her wrong.

I leaned back to give her space, but her fingers suddenly skimmed across my waist, clenching my shirt and drawing me nearer.

“Don’t what?” I asked in confusion. She was so fucking messing with my head.