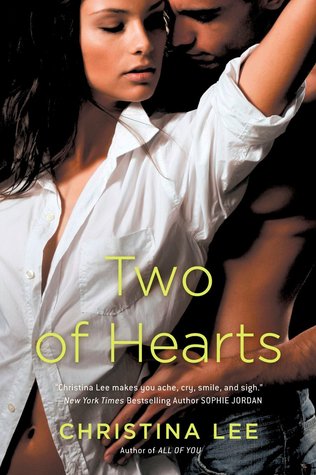 Today, right here, right now you have the chance to read an exclusive excerpt from Two of Hearts by Christina Lee. I just finished it last night, and it is DIVINE!

The release date is May 5th so you don’t have too much longer to wait til you can read it yourself!!!

Dakota Nakos was always the resilient, strong-willed achiever. But when her father dies and she’s entrusted with the family’s casino, she feels vulnerable, scared, and more than a little emotional —not exactly the best time to see an old lover she’s never really gotten over.

Dakota once meant the world to Shane Garrity. Then suddenly he left town to train as a U.S. Marshal, and their love for each other crashed into a memory. Now he’s come home for her father’s funeral, and one look at the girl he left behind stirs up both memories and regrets, and reignites a fire he feared he’d lost forever.

Dakota may be the same driven girl she always was, but she’s also changed in ways neither could have anticipated. She’s not just a young woman searching for own identity in the Native American community in which she was raised, but one questioning her new life outside her father’s shadow. Above all she wonders if Shane can push past her weakened defenses to rekindle what they once had, or whether the intense blaze between them will ultimately reduce her heart to ashes.

When her eyes narrowed, I knew I had struck the nail on the head. But she wasn’t about to admit to any weaknesses. In some ways, Dakota was just as hardheaded as she’d always been. Hot and cold, just like I’d remembered.

“You sure this isn’t about something else?” she bit out. “About you being heroic or maybe thinking that I’m some damsel in distress? You know I’m perfectly capable— ”

“Are you shitting me right now?” I worked to keep my lips in a neat, straight line. That was a low blow, and she knew it. She was just trying to get under my skin. Push me away.

I stepped into her space and noticed the small tremor in her shoulders. “I’m good at my job. I can sense a pressure cooker situation. Of course this has nothing to do with you being a woman. Are you telling me you’d turn down that kind of help because of your own pride?”

She gasped and tried to shift away from me. But I clutched hold of her arm, tilted her chin with my thumb, and forced her to look at me. “Stop being stubborn, and say what you mean, Dee.”

Her nostrils flared briefly before she said, “You have a life elsewhere . . . and I—”

“I also had a life here . . . people here . . . who I about care very much,” I said, and her eyes flickered momentarily. “No matter what happened between us.”

“I understand your need to help. That’s the way you’re made. And it’s kind of you to offer your expertise and to talk to the police. But then you need to be on your way.”

I slid my fingers around her waist, my other hand at her neck. Her hair was up in a loose bun but I wanted so badly to feel the silk glide through my fingers. See it fanned across my pillow in the morning.

“You’re making assumptions about where I want to be,” I said, close to her lips. “Right now, I want to be here, in my hometown, with your family, with my best friend. With you.”

Before she could get another word out I pulled her body flush against mine, my forehead resting against hers. “Don’t you know how much I’ve thought of you over the years? Wondered how you were doing, if you were okay? Whether you still thought of me, too?”

“You could’ve, too,” I said, my mouth sliding along her throat.

“You let me go,” I said against her ear, and she shivered. “Pulled down the shades and shut me out.”

“You wanted to go,” she whispered.

“How do you know if you never even asked?”

Her lips parted and her eyebrows arched. “Neither did you.”

Her words stunned me so much, I pulled back to stare into her eyes. “You wanted me to ask?”

“I . . . God, I don’t know. This is . . .” She pushed me back further in her frustration, creating distance between us again. “You’re making it hard for me to breathe.”

“Nice to see I still have that effect on you.”

You can enter to win any one e-book of Christina Lee’s just by leaving a comment.

If you choose Two of Hearts you will receive it after it releases.

Giveaway will run through Sunday , May 3rd.

Winner will be chosen by Random.org.

Thanks and hugs to Christina for allowing me to host the excerpt, and for the giveaway!

17 thoughts on “Exclusive Excerpt and Giveaway! Two of Hearts by Christina Lee!”