It’s me this week and I just finished reading the latest completed story from Suitablyironicmoniker called Isabella. 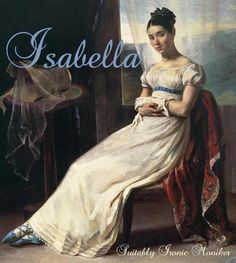 If you love Historical fiction, then you will love this story. I first heard about it when Cullenboyz recd. it in her guest post she did for us last year.  Check out her thoughts here. But this is not the first story from Suitablyironicmoniker that I’ve read and loved, so join me in celebrating her other stories as well…

Author’s summary: In the Cornish countryside of 1804 England, a foreign visitor brings Isabella to reconsider the inexplicable occurrences she had always taken for granted. AU

If I were to describe this story, I wouldn’t have necessarily connected it to Twilight, because it felt more like Discovery of Witches to me. The Bella we know from Twilight is there, but she has gifts that she inherited from her mother that she doesn’t quite understand because her mother kept her own gifts hidden. She was trying to protect Bella.

The story starts after both of Bella’s parents have died, and she is living in her parents’ home with her caretaker from birth Sheil. She has an interesting encounter on a walk one afternoon alone on a path that leading into the closest town. It is a handsome frenchman that engages her in conversation, and Bella’s reaction to him stays with her, though she doesn’t share this with anyone.

It’s when her long lost grandmother, her mother’s mother, shows up, that things get interesting. She has already had two encounters with Mr. Macon, but still doesn’t trust her true self with him. Who can blame her, when she is just now understanding her true powers.

Excerpt from Chapter 12, Wicked Will:

The frown on her brow deepened as she thought of Mr. Maçon’s most recent visit, unable to make any sense of his behavior, unwilling to read too far into his intentions. What if his only reason in paying her any heed was fascination with what he suspected she could do? She thought of the fair held every August in Penzance to celebrate St. Peter’s Day, the press of crowds, farmers and fishermen dressed in their finest garb, vendors crying their wares, and hawkers joining the cacophony as they handed out flyers advertising curiosities and spectacles hidden behind stained tent flaps: tumbling and acrobatics, counting pigs, giants and midgets, rope-walkers and strong men. Sheil had always shaken her head at such entertainments, considering them far too déclassé for the daughter of a Swan. But now Isabella wondered if this was how Mr. Maçon perceived her, a curiosity, a spectacle, too strange to disregard.

Isabella was striding so swiftly, she had come to pant breathlessly against her stays, her brow damp, her eyes blind. For such thoughts were sobering, forcing her to realize how much she had begun to hope, how much she had come to wonder at another world, another future for herself. She thought it impossible that his intentions could be anything other than honorable but knowing what she did of her own circumstances, it still seemed so unlikely.

She shook her head, abruptly coming to a stop where the path cut most closely to the cliff edge, breathing heavily as she gazed out over the turbulent sea. In the distance she could see the bob and dip of small boats, fishermen who had likely cast out this morning with no notion of the rough weather coming.

He hides much but you need not fear him…

She did not feel the first drops of rain as she sank into the memory, lips parting with new understanding; at the time, she had been far too shocked to learn what her grandmother had known in speaking those uncanny words, indicating a knowledge of Mr. Maçon’s existence as well as their acquaintance with one another, that it was not until this moment that she could absorb what Marie had meant.

When the people that she’s known all of her life turn against her in ignorance and turn violent, it is Mr. Macon that comes to her rescue, and reveals his true self in the process. They learn to trust and understand each other when they travel to a safe place, in hopes of being together.

It is a beautifully written story, with the subtle UST that you would expect from a Jane Austin novel.

His eyes were nearly wild as his gaze lifted, moving towards her with steps that were unnaturally swift, one hand held open, pale palm wide and supplicating. “Do you see? I am no prize. My promise to you is as much for myself as it is for you.”

Isabella’s eyes were wide and almost frightened as she considered him, so tormented and more unrestrained than she had ever seen.

Edward’s hand dropped as his eyes fell to the floor, his composure partly returned, his voice regaining some sobriety and control. “And for all that…” He breathed deeply, his gaze slowly rising to her meet her own.

“For all that, the better you think of me, the more I wish to make your assumptions true.”

Here are two other stories from suitablyironicmoniker that I have read ages ago and loved also.

A student of social work & her troubled client. Longing to help him, she suspects & soon learns there is far more beneath the surface than she could have ever guessed. & perhaps her motives for helping are more complicated than she’s willing to admit. AU

Incunabula: Or The Golden Legend

A determined curator vies with a private collector when rumors of a rare book surface in central Europe. All human, canon couples…eventually.

It’s been awhile since I’ve read these stories, that I might just find time to read them again.