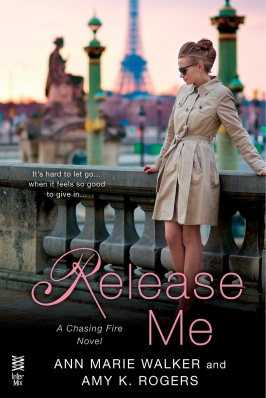 The second in the “seriously sexy and sinfully steamy”* Chasing Fire series, about a pain too deep to forgive and a passion too hot to forget…

Alessandra Sinclair knows that Hudson Chase is the last man she should want. The boy from the wrong side of the tracks has grown into a man who would do anything to get ahead, even if it means breaking Allie’s heart. But whenever she’s near him, the attraction between them is undeniable. And now that they’re working together, keeping her distance from Hudson is almost as impossible as keeping her feelings in check…

Hudson already lost Allie once and he refuses to lose her again. He’s determined to use their new business partnership to rekindle the spark he knows is still there. Only the closer he gets to winning her over, the clearer it becomes there are still secrets that could tear them apart for good…

Hudson’s eyes flared. “Taunting me?” he asked. But he didn’t wait for an answer. Instead he lurched forward in a few powerful strides, palming the back of the couch with his free hand and leaping over it.

With her heart pounding, Allie took off in the only available direction. When she reached the stairs, Hudson was right behind her, taking them two at a time. She gasped as his fingers grazed her hip before dropping to catch her ankle.

He yanked her down as he prowled up her body, his hips surging against her backside as he lowered his mouth to her ear. “I’ve caught you, baby.” He buried his hand in her hair and pulled her head to the side. She moaned when his lips found the spot on her neck that never failed to drive her wild. Pleasure shot through her as he sucked on the sensitive skin and she writhed beneath him. “Now, what shall I do to you?”

Allie’s lips parted on a raged breath. “Whatever you want.”