This week I’ve been in bed with not just one, but two Kristen Ashley books. I know, I know, lucky me! 🙂

First up is Hold On which is the 6th and final book in The ‘Burg series. It’s always hard to say goodbye to a favorite series, and I’m sure you’ll love this one as much as I did. Garrett Merrick and Cher Rivers are another great couple from one of my favorite authors. It just released last Tuesday, so you can jump right into it! 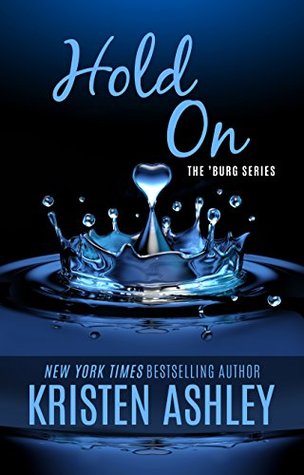 In love for years with the last bastion of the ‘burg’s eligible bachelors, Garrett Merrick, Cher worked hard at making him laugh. Being one of the guys. Having him in her life the only way she could. All this knowing he was in love with another woman.

The Merrick Family is known for loving deep. So when Cecelia Merrick was murdered, it marked the Merricks in a way none of them recovered. Both Cecelia’s children found love. Both turned their backs on it. But Garrett “Merry” Merrick knew in his soul the woman he divorced years ago was the one for him.

Until the night when Cher took Garrett’s back and things changed. The Merrick family loves deep. They also protect fiercely. And with his eyes finally open, Garrett sees the woman who truly is for him and he goes after her.

The second book is Walk Through Fire and this is the 4th book in the Chaos series. It releases on October 27th, but is available for pre-order now, and I can tell you that it is phenomenal!

One of the many things I love about Kristen Ashley is that she writes stories for couples that are of different age groups, and she injects her special brand of hotness into all of them. These are 2 books that need to be on your radar if they aren’t already!

Who is in your bed this Sunday?!?

One thought on “Sundays In Bed With… 2 from Kristen Ashley!”