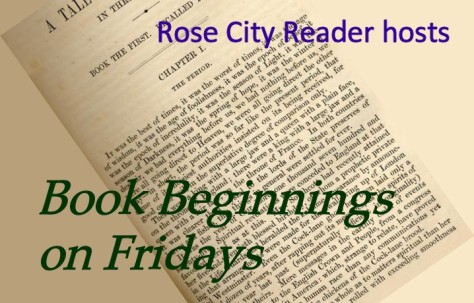 Book Beginnings on Fridays is a meme hosted by Rose City Reader. A couple of Fridays a month, I will share the first sentence (or so) of the book I am currently reading, along with my initial thoughts about the sentence, impressions of the book, or anything else the opener inspires.

Last week I bought the hardcover version of the Twilight Special Tenth Anniversary/Life and Death Dual Edition, for a birthday present to myself. I was compelled to reread Twilight again first. This is probably my 4th or 5th read mind you. It had been years though, and I was more than pleasantly surprised at how much I still loved it! Stephanie’s descriptive writing style and her amazing characters, namely Edward Cullen still held my attention. I am now going to start Life and Death, Twilight Reimagined…

My mom drove me to the airport with the windows rolled down. Though it was January everywhere else, it was seventy-five degrees in Phoenix, and the sky was bright blue. I had on my favorite t-shirt- the Monty Python one with the swallows and the coconut that Mom got me two Christmases ago. It didn’t quite fit anymore, but that didn’t matter. I wouldn’t be needing t-shirts again soon.

So the first sentence is exactly the same as Twilight, but the rest of the paragraph is modified. Kind of what I expected anyway. The preface and the quote are also different from the original story. While I was disappointed with everyone else that she didn’t publish Midnight Sun, I do appreciate Stephanie’s apology in the Forward. I know that she knows that is what we all wanted, but I am still confused as to why she thought she needed to write this. There is enough fan fiction out there that covered this premise, I am sure.

We shall see, and I will let you know what my thoughts are…