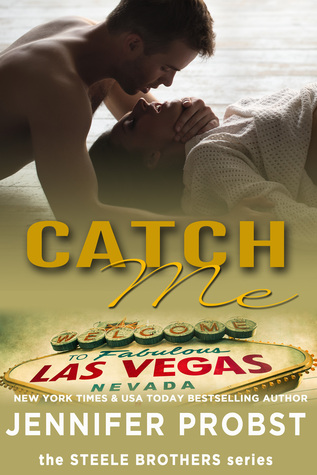 Rick Steele has avoided relationships since he caught his fiancée cheating, but when he’s talked into a one night stand through Madame Eve, he’s not prepared for his emotional and physical reaction to his date. Tara shows him a raw passion and honesty he’s never encountered. For the first time, Rick wants more than one night, but he needs to catch her first…

Tara Denton escaped a brutal past and needs one night with a stranger to get beyond her sexual and emotional limitations. On the brink of recovering her strength and independence, she wants nothing to do with a relationship. But Rick Steele does more than rock her body…he rocks her heart. Tara has to make a choice, but is she ready to get caught?

He let his eyes adjust to the change of light and focused on the far right corner.

She sat with her legs crossed, neatly tucked under the glass table. A pink frothy drink rested in front of her, and she fiddled with the paper umbrella in nervous anticipation. She didn’t look up, and Rick grabbed the moment to study her before she had the chance to put her guard up.

Her body was like nothing any tabloid magazine had tried to emulate with their extensive Photoshop and airbrush capabilities. This woman was the real deal. The plain photo that had been emailed to him didn’t do her justice. Not even close.

He estimated Tara topped five foot, even with the three-inch heels she currently had wrapped around her sexy feet. She had obviously gone all out for their meeting, evident in the flashy silver top clinging to lush breasts, and the short black skirt she kept yanking down, revealing a good few inches of rounded thigh. She sported the perfect hourglass figure that pushed his lust buttons to an all time high, but never seemed fashionable for women nowadays.

Her hair was jammed up in a sophisticated chignon. Loose strawberry blonde strands popped out in an effort to be freed. She wore a bit too much makeup, but under the bright blue lights, Rick spotted the smattering of freckles and pure white skin that was a part of her Irish heritage. In a few seconds, he summed up one of her problems immediately. She was a gorgeous woman who didn’t know it. She seemed uncomfortable in her flashy clothes, makeup, and heels. Rick bet she’d be ready to flee within minutes if he didn’t walk over and close the deal.

He waited one beat. Two.

A foreign longing rose up and caught him in a chokehold. Aqua blue eyes widened as her gaze locked with his. The anxious worry he glimpsed deep in those depths caused a protectiveness to surge from within. His second thought centered on what she would look like when he thrust deep inside her and brought her to orgasm.

He hardened instantly. Son of a bitch. This was going to end up being an interesting night after all.

Rick held her gaze for a moment longer. Then strode over to the table.

Go HERE to enter to win a signed paperback of Searching For Always and Summer Sins!

PRE-ORDER LINKS FOR THE REST OF THE SERIES:

AUTHOR INFORMATION:
Jennifer Probst –  Bio:
Jennifer Probst wrote her first book at twelve years old. She bound it in a folder, read it to her classmates, and hasn’t stopped writing since. She took a short hiatus to get married, get pregnant, buy a house, get pregnant again, pursue a master’s in English Literature, and rescue two shelter dogs. Now she is writing again.She makes her home in Upstate New York with the whole crew. Her sons keep her active, stressed, joyous, and sad her house will never be truly clean.
She is the New York Times, USA Today, and Wall Street Journal bestselling author of sexy and erotic contemporary romance. She was thrilled her book, The Marriage Bargain, was ranked #6 on Amazon’s Best Books for 2012. She loves hearing from readers. Visit her website for updates on new releases and her street team at www.jenniferprobst.com.Website:  www.jenniferprobst.com
Facebook Fan Page:  https://www.facebook.com/jenniferprobst.authorpage
Twitter:   https://twitter.com/jenniferprobst
Goodreads:  https://www.goodreads.com/author/show/2965489.Jennifer_Probst