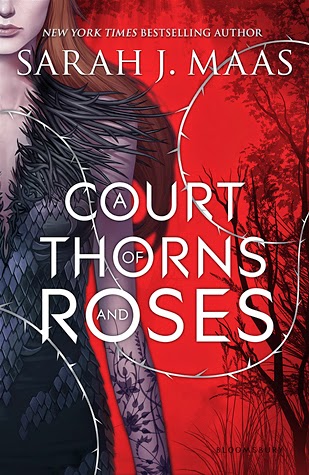 A Court of Thorns and Roses by Sarah J. Maas

When nineteen-year-old huntress Feyre kills a wolf in the woods, a beast-like creature arrives to demand retribution for it. Dragged to a treacherous magical land she only knows about from legends, Feyre discovers that her captor is not an animal, but Tamlin—one of the lethal, immortal faeries who once ruled their world.

As she dwells on his estate, her feelings for Tamlin transform from icy hostility into a fiery passion that burns through every lie and warning she’s been told about the beautiful, dangerous world of the Fae. But an ancient, wicked shadow grows over the faerie lands, and Feyre must find a way to stop it . . . or doom Tamlin—and his world—forever.

Perfect for fans of Kristin Cashore and George R. R. Martin, this first book in a sexy and action-packed new series is impossible to put down!

I had something in mind to review this week, but started this book a few days ago. I could not stop reading after the first couple of chapters. It is so good that I decided to write this post immediately after finishing!

Like the summary suggests Beauty and the Beast does come to mind, but this is not a Disney movie version. Because of the violence and love scenes I wouldn’t even categorize it as Young Adult.

Feyre is an interesting and self reliant heroine and being in her head can be a dark place. Because of her mother’s death and her father’s choices, she is forced to be the sole provider for her family that includes her two sisters. I have to say that I found her family pretty annoying, because they never seemed grateful for everything that Feyre does for them to survive.

While she is a huntress, she has this softer creative side, that we get to experience when she decides to embrace her new life at the estate. The author “paints a beautiful picture” with regards to almost every scene in the fairy world, and I would have loved to see all of Feyre’s paintings. The art gallery inside of the Tamlin’s estate sounds like it would be beautiful as well.

I barely registered moving into the gallery, one hand absentmindedly wrapping around my throat as I looked up at the paintings.

So many, so different, yet all arranged to flow together seamlessly…Such different views and snippets and angles of the world. Pastorals, portraits, still lives…each a story and an experience, each a voice shouting or whispering or singing about what that moment, that feeling, had been like, each a cry into the void of time that they had been here, had existed. Some had been painted through eyes like mine, artists who saw in colors and shapes I understood. Some showcased colors I had not considered; these had a bend to them. A portal into the mind of a creature so unlike me, and yet…and yet I looked at its work and understood, and felt, and cared.

“I never knew,” Tamlin said from behind me, “that humans were capable of…” He trailed off as I turned, the hand I’d put on my throat sliding down to my chest, where my heart roared with a fierce sort of joy and grief and overwhelming humility–humility before that magnificent art.

Tamlin. He is not what I expected, but then for most of the book he is also not his true self. He had his reasons for hiding the truth, mainly because he didn’t have a choice. None of the fairies did. I still fell for him though. I can’t wait to read more about him in the rest of the series, because he has more to reveal about himself I am sure.

Of course, there is a dark hero that bares some attention. The Dark Lord of the Night Court, Rhysand. He has his own agenda and held my attention in every scene he was in, because I just didn’t know what he was going to do and why. He’s a mystery that one, and I am sure that we will get more of his story as well.

I’d been equally foolish for feeling a shred of pity for him–for the lone, brooding faerie, for someone I had so stupidly thought would really care if he met someone who perhaps felt the same, perhaps understood–in my ignorant, insignificant human way–what it was like to bear the weight of caring for others.

He took my hands. His callused fingers, strong and sturdy, were gentle as he lifted my bleeding hand to his mouth and kissed my palm. As if that were answer enough.

Slowly, so slowly, his eyes roved down, then up. As if he were studying every inch, every curve of me. And even though I wore my ivory underthings, that gaze stripped me bare.

I was an unburdened as a piece of dandelion fluff, and he was the wind that stirred me about the world.

I give this book 5 magical stars and put it on my “favorites” and “top shelf fantastic reads” shelf on Goodreads. This book is also a Goodreads Choice Award Nominee for Young Adult Fantasy & Science Fiction (2015).

I am so excited that we won’t be waiting long for the second book in the trilogy. The Court of Mist and Fury, comes out May 3rd!! It is actually available for preorder now!