Hi guys! It’s both an honor and a pleasure to work with RC Boldt. I made a very special book trailer for the third book in her Tease Me Series—Remember When that will be release this May 10th! 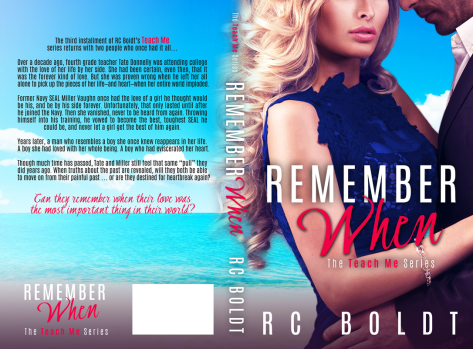 Over a decade ago, fourth grade teacher Tate Donnelly was attending college with the love of her life by her side. She had been certain, even then, that it was the forever kind of love. But she was proven wrong when he left her all alone to pick up the pieces of her life—and heart—when her entire world imploded.

Former Navy SEAL Miller Vaughn once had the love of a girl he thought would be his, and be by his side forever. Unfortunately, that only lasted until after he joined the Navy. Then she vanished, never to be heard from again. Throwing himself into his training, he vowed to become the best, toughest SEAL he could be, and never let a girl get the best of him again.

Years later, a man who resembles a boy she once knew reappears in her life. A boy she had loved with her whole being. A boy who had eviscerated her heart.

Though much time has passed, Tate and Miller still feel that same “pull” they did years ago. When truths about the past are revealed, will they both be able to move on from their painful past … or are they destined for heartbreak again?

Can they remember when their love was the most important thing in their world?

What happens when you combine a hot, former SEAL and a schoolteacher who was once the love of his life before she disappeared without a trace? Find out on May 10th!

Other books in the series…

RC Boldt is the wife of Mr. Boldt, a retired Navy Chief, mother of Little Miss Boldt, and former teacher of many students. She currently lives on the southeastern coast of North Carolina, enjoys long walks on the beach, running, reading, people watching, and singing karaoke. If you’re in the mood for some killer homemade mojitos, can’t recall the lyrics to a particular 80’s song, or just need to hang around a nonconformist who will do almost anything for a laugh, she’s your girl.