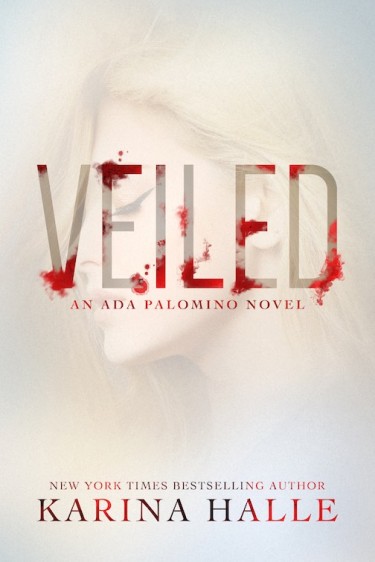 She just wanted a normal life.
He had other plans for her.
Would you go through Hell for the one you love?
VEILED is a STANDALONE paranormal romance and urban fantasy from the New York Times bestselling author of The Lie and The Pact.

Death.
It’s something that Ada Palomino has always known so well, having grown up in a house of horrors, surrounded by a family plagued by ghosts and demons and things that go bump in the night. But after the sudden and tragic death of her mother two years ago, death has never felt so personal. Or so close.
Now eighteen, Ada is trying to move on with her life and the last month of summer holds nothing but sunshine and promises with her first year at a Portland design school just around the bend.
That is until her increasingly violent and realistic dreams, dreams of other worlds, of portals and veils where her mother is tortured and souls bleed for mercy, start to blend into reality. Ada has to lean on her older sister, Perry, to try and make sense of it all but even then, she’s never felt more alone.
Then there’s Jay. Tall, handsome and deeply mysterious, Jay would be just another stranger, a familiar face on the bus, if it wasn’t for the fact that Ada has met him before. Every night.
In every single dream. And the more that Ada is drawn to him in both worlds, the more she’s in danger of losing everything. Including her heart. And her very soul.

Yes, this book is a stand-alone, but there is a connection to the Experiment in Terror series, which I haven’t read. That being said, I also haven’t read much from Karina Halle. I went into this not sure about anything…

First, I did try to read the first book in the Experiment in Terror series, Darkhouse, a couple of years ago, and left it unfinished. Please don’t hate me, but it was soooo boring. It just didn’t hold my attention. I know all of the Karina Halle fans are going to hate me, but I tried. I really tried. I just couldn’t relate to Perry at all.

This book though intrigued me though. Maybe because the detailed explanation from Karina herself.

Q: Is this YA?
A: No. The main character is 18 and there is sex, crude language and violence in the book. Readers sensitive to those components may not find the book suitable. If you are a reader who doesn’t like a lot of the “F” word, this is your warning….

Q: Is there a cliffhanger?
A: Nope! There’s also no cheating and no love triangle (think I’ve covered the bases there!)

Q: Do I need to read the series (Experiment in Terror) that Veiled is a spinoff of first?
A: Nope.
Absolutely not.
Veiled stands alone from that series.
Don’t listen to anyone say otherwise. EiT fans are very passionate about their series and want to share the love (and I love them for it) BUT Veiled was written specifically for those people who haven’t read EIT.
And furthermore…most importantly…IF you do decide after reading Veiled that you would like to read EIT, then I promise, promise, promise that your enjoyment of that series will not be spoiled or compromised. Trust me on this. EIT is too epic of a series to be spoiled.
PS if you are a passionate EIT fan, Veiled is a great starter to get people interested in this whole “world.” Also, all your favorites do appear in this story as it takes place right after Dust to Dust.

Q: Is it horror? Your other series was and I don’t handle scary very well…
A: No, it’s paranormal romance (though I promise you there are no vampires or werewolves), and while there are creepy elements to the story, it wouldn’t be classified as horror. You’ll be fine.

Second, I don’t know if I totally agree with all of the answers above, but I loved this book! For me, it read like a Supernatural episode. I loved Ada and Jay. Their chemistry was fantastic. Her sister Perry and Dex do make multiple appearances, and a lot is mentioned about what happened to them, so I kind of think that would ruin the series for people who haven’t read it, but I don’t really care. I still loved this book.

Creep factor on a scale of 1-10, definitely 11. There were scenes that I felt like the temperature was dropping. I got chills… Really amazing writing. The storyline is this. Ada is getting ready for school and new neighbors move in next door. She actually likes them, but one kind of stands out. Jay. Maybe because he is someone she recognizes from her dreams. She thinks he’s a ghost, but he’s not. That doesn’t mean that she doesn’t see dead people. She is a magnet though, and Jay is her guide to the other side.

The characters in this book are flawed, honest, and interesting. I am really hoping that maybe, just maybe Karina doesn’t end their story with this book.

– When you wake up from the best dream ever, reality is a burden, a slap in the face reminder that you could feel this, you could have this, but you don’t and you won’t.

– The normal I’ve always wanted to be will now never be reached. It was always in my grasp…but it’s just smoke in my hand.

I give this book 5 Supernatural stars, and put it on my “top shelf fantastic reads” book.

If you loved the Experiment in Terror series, and want to share your thoughts about Veiled, I would love to hear from you!