Hi guys! I’m excited to talk about the lovely Sara Gruen’s new novel, At the Water’s Edge. As a huge fan of Sara’s Water for Elephants, I cracked open this new book with high expectations and was not disappointed.

END_OF_DOCUMENT_TOKEN_TO_BE_REPLACED

In less than a month, the Outlander mini series on Starz is going to resume!! I am so excited that I decided to move forward in my reading of the series by Diana Gabaldon, and start Drums of Autumn. At the same time, I am also rewatching all of the previous episodes of Outlander.

That is what I mean by OVERDOSING. LOL! Check out my thoughts on the series and the fourth book, Drums of Autumn.

END_OF_DOCUMENT_TOKEN_TO_BE_REPLACED 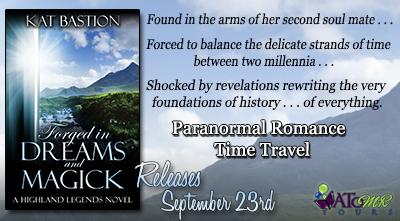 Today we’re taking part in a pre-release event for Kat Bastion‘s book, Forged in Dreams and Magick. We have an excerpt for you to read and giveaway to enter…

END_OF_DOCUMENT_TOKEN_TO_BE_REPLACED

Exiled in Paris, the frail, elderly Mathilde Kschessinska sits down to write her memoirs. A lifetime ago, she was the vain, ambitious, impossibly charming prima ballerina assoluta of the tsar’s Russian Imperial Ballet in St. Petersburg. Kschessinska’s riveting storytelling soon thrusts us into a world lost to time: that great intersection of the Russian court and the Russian theater. Through Kschessinska’s memories of her own triumphs and defeats, we witness the stories that changed history, from the seething beginnings of revolution to the end of a grand, decadent way of life that belonged to the nineteenth century. Based on fact, The True Memoirs of Little K is “an engrossing tale of love, loss, and history”

END_OF_DOCUMENT_TOKEN_TO_BE_REPLACED

Fifteen hundred years ago, Serenity Cardea took the life of the only vampire she ever regretted killing—Henry, her sister’s husband. With her sister brutally murdered, Serenity had little choice but to grant Henry the only request he had: death. Centuries later, Serenity is no closer to discovering who betrayed them or instigated the massacre of her brothers and sisters.

The vampires want dominance—over their food, the other races . . . the world. To get it, they’ve systematically hunted down and slaughtered the only ones standing in their way. The Keepers.

As a Keeper, Serenity is tasked with protecting the delicate balance between the creatures of the world: Vampire, Witch, Were, and Human. Her kind exists to ensure that no single race sways the balance, dooming the world to destruction.

They’re on the brink of extinction, with no sign of return. Now only two remain, and Serenity’s last brother is facing death, leaving her standing alone against a never-ending tide of vampires, all wanting one thing: power.

Then she meets Ray Synclair, a history professor in training with a passion for centuries past, and the harsh reality of her limited time comes crashing down on her. He is her weakness. His mortality is the countdown on Serenity’s life, and with each passing second, it comes closer to the end, for both of them.

She must uncover the secrets of her people’s past and find out who betrayed them—and who is still doing so—before it’s too late.

Serenity’s days are numbered, and Ray will be drawn into a world of myth and legend, where just being alive is enough to get him hunted down.

Because the only way to kill a Keeper is to kill their partner . . .

END_OF_DOCUMENT_TOKEN_TO_BE_REPLACED

From the Publisher: Jennifer Lee Carrell’s highly acclaimed debut novel is a brilliant, breathlessly paced literary adventure. The action begins on the eve of the Globe’s production of Hamlet when Shakespeare scholar and theater director Kate Stanley’s eccentric mentor Rosalind Howard gives her a mysterious box, claiming to have made a groundbreaking discovery. Before she can reveal it to Kate, the Globe is burned to the ground and Roz is found dead…murdered precisely in the manner of Hamlet’s father.

Inside the box Kate finds the first piece in a Shakespearean puzzle, setting her on a deadly, high stakes treasure hunt. From London to Harvard to the American West, Kate races to evade a killer and solve a tantalizing string of clues hidden in the words of Shakespeare, which may unlock one of history’s greatest secrets.

Here’s what I thought…

The first thing I want to tell you is that I don’t normally review books like this one. Why? Well it’s just not the type of book I’ve been reading the last couple of years. Mostly I’ve been reading romance, erotica, paranormal, or a combination of the 3. The genre best suited for this book is mystery/historical fiction. I used to read a lot of  both of those genres. What caught my eye and then my attention? The book’s cover art.

I’m usually loathe to compare books or writers but I think if you like Dan Brown’s DaVinci Code, or Lost Symbol this is a book you’d enjoy as well…

END_OF_DOCUMENT_TOKEN_TO_BE_REPLACED

Question of the week: Doing something a bit different this week…I would like you all to turn to page 60 of your current read (Even novella’s should have at least 60 pages, true.) And share the third to last sentence on that page! Make sure to share the title and author as well. 🙂